And then a sudden need for cheese.

I feel ambivalent about this episode - it is undoubtedly very funny in parts but I feel uncomfortable with so many woman behaving like idiots - I know they are under a spell but it still makes me feel bad.

The scene between Xander and Buffy at the beginning makes me almost like him but it is the subsequent events that make me feel he's not such a bad guy after all. There is a lot of enjoyable and heartfelt Xander and Cordelia moments. She gets her priorities wrong and hurts Xander quite brutally when she rejects him (maybe Buffy was right with her heart comment "Does she know what one of these is?"). Another great scene when Xander asks for his gift back and it turns out Cordelia is wearing it. They worked very well together and looking ahead I think they probably worked better than Xander and Anya which is something I am surprised to find myself writing. The writers never got the chance to lose interest in Cordy the way they lost interest in Anya so maybe that explains it. Cordy comes good in the end when she turns on Harmony and co: "You're a sheep. All you ever do is what everyone else does just so you can say you did it first. And here I am, scrambling for your approval when I'm way cooler than you are cause I'm not a sheep. I do what I wanna do, and I wear what I wanna wear. And you know what? I'll date whoever the hell I wanna date. No matter how lame he is." (I wonder if there is a connexion with Xander's bedroom sheep?). Xander is so miscast as a dork - he looks great walking down that corridor to the Average White Band. 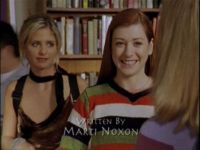 Willow is adorable yet again when she tells Amy "My boyfriend's in the band!". Angelus is so bad - Spike is beginning to boil as he watches nasty old Angelus flirt with his girlfriend and give her better Valentine's gifts. The fighting in BtVS is my least favourite aspect of the show partly because of the discrepancy in build between Sophia Crawford and SMG which jars and partly because of the ability of the newly risen to fight really, really well.

Amy does her best Hypnotoad impersonation (or is the other way around?) when she hands in her invisible homework.

I'm not sure if I have mentioned this before but Sarah Michelle Gellar has really hairy arms - what gets me is I didn't notice this until season five or so. I find it odd that in an era when some (a lot of?) women shave so much of their body hair that arm hair is generally left alone.

I love the way Amy leans to look past Xander. 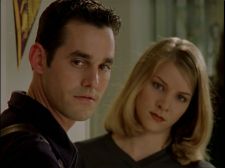 Buffy is in some terrible outfits in this episode - the scarf is bad enough - but the tiny leopard print mini-skirt (with a slit!) makes her look like a hooker. (I can't find a decent grab of it but trust me.)

Buffy commiserates with Xander and as they face each other you can see her starting to fancy him - SMG does this extraordinarily well. 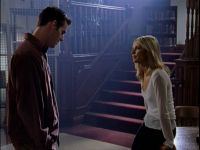 Xander mentions lap-dancing which strikes me as odd - surely, he's underage? Anyway, Buffy comes on strong and it's quite disturbing as well as funny to see her flirting outrageously. Xander runs home to find Willow in his bed and, omg, this scene is hilarious (and a little sad). Is she wearing his shirt? Does she really suck on his ear and does she really say "force is okay"? And why does it say sheep on Xander's wall? Robia LaMorte does the infatuation thing really well complimenting his shirt and rubbing her hand up his bicep. Buffy in a raincoat is a Xander fantasy come true and he does the right thing. Buffy hits Amy far too hard considering she isn't a demon and it's pleasing when Amy turns Buffy into a rat. Oz hits Xander which was kinda fun. "Joycie" kissing Xander's neck and handling him with her "mom aged mitts" was a moment to be savoured. Willow doesn't entirely disappear from the angry mob in the basement but it puzzles me that we weren't rewarded with a hurt face as she realises how her humiliating behaviour was with Xander.

Oz chasing Buffy in the basement is dull and gets in the way of the Xander Cordy affair but it is worth it for the pay-off as she is de-ratted: "I seem to be having a slight case of nudity here" " "But you're not a rat. So call it an upside." I have to ask - was Buffy a plain rat or was she Buffy-rat? And, big big annoyance, if she can be changed back to a human so easily then why was Amy-rat left to run round her wheel by super-witchy Willow for so long? Not only does it say a lot about Willow (and Tara's) lack of manners, it deprived us of more of Elizabeth Anne Allen.

"Sorry to say, Xand, slaying is a tad more perilous than dating" "Well, you're obviously not dating Cordelia"

"My boyfriend's in the band!" "Cool" "I think you've now told everybody" "Only in this hemisphere"

"Dear Buffy. I'm still trying to decide the best way to send my regards" "Why don't you rip her lungs out? It might make an impression" "Lacks...poetry" "It doesn't have to. What rhymes with lungs?"

"I want you, Xander...to be my first!" "Baseman! Please tell me we're talking baseball."