A monster of the week episode with a decidedly unpleasant child killer who uses stalks that come of its eyes to murder - I see one of Cordelia's eews and raise it to a yuck. The little girl who played child Buffy was impeccably cast, I don't know what SMG looked like when she was young but she could have looked like Mimi Paley (Samantha Mulder!).

The exchange when Giles and the others pretend that Buffy is just delusional while Joyce is there made me realise just how much Joyce is being deceived. This is reinforced when later she says “Oo, looks like I interrupted a secret meeting”. She has the right to feel very angry and betrayed when she learns the truth. 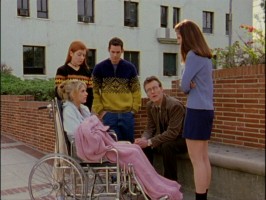