I can barely remember the plot of this but what is important is the fluke and the interactions between Buffy and Cordelia.

I’m not sure what to make of the fluke. Is it organic? Is Xander like a child who wants what someone else has just because he doesn’t have it (note his “half Monty” jealousy). Is it easy not to blame Willow? She is after all getting attention from the one that she has had a huge crush on. Is this because she is unsure about her relationship with Oz? We have Cordelia (once again) showing how much she loves Xander and, because of her character development, we care that she is going to get hurt. Willow stops mooning at Oz, which is one good thing.

Buffy and Cordelia together are a mix of outright nastiness with an edge of jealousy on both sides. The writers can’t help putting Cordelia on the wrong side of meanness (more of that later in the season). The scene in the library when Cordy confronts Gorch is awesome: I hope she’s like this in Angel: “I hear you, you redneck moron. You got a dress that goes with that hat?” “I'm gonna...” “Rip out my innards, play with my eyeballs, boil my brain and eat it for brunch? Listen up, needle-brain. Buffy and I have taken out four of your cronies, not to mention your girlfriend.” “Wife!” “Whatever. The point is, I haven't even broken a sweat. See, in the end, Buffy's just the runner-up. I'm the Queen. You get me mad, what do you think I'm gonna do to you?”

Oddities: Would Faith even be allowed to attend a high school dance? Xander should help Cordelia but why can’t Willow work for both of them (above board and not via blackmail: “And I'm sure they're more important than all we've been through together, or the number of times that I've saved your life”)? And this joke: “Oh, God! What did you two do to each other?” “Long story.” “Got hunted.” “Apparently not that long.” (good gag - the first time - two episodes ago).

“I'm gonna show you how it's done. I'm gonna run for Homecoming Queen, and I'm going to win.” “This is starting to be sad.” “Sorry, Cordy, but you have no idea who you're messing with.” “What? The Slayer?” “I'm not talking about the Slayer. I'm talking about Buffy. You've awakened the Prom Queen within. And that crown is going to be mine.” 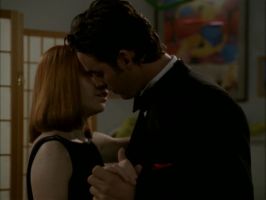 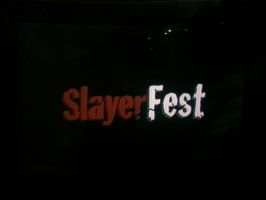