This is the world we made. Isn’t it wonderful?

This is one of my favourite episodes of BtVS and I consider it so highly that I forgive Marti Noxon for both Bad Eggs and Dead Man's Party. For just now, anyway.

I’m not going to go on about this episode because I’ll just become incoherent. Suffice to say that the death of Cordelia with an anguished Giles looking helplessly on is only surpassed in this episode by the breaking of Buffy’s neck by the Master. The way she lifelessly sways and drops is more of a gut-wrencher than her real death in The Gift. 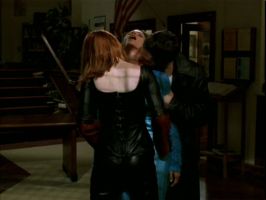 Xander and Willow killing Cordelia is powerful and shocking. There is something perverse about Xander pulling Willow further towards Cordelia’s neck.

Anya seems to perk up at the notion that Xander is marginally cooler just before Cordelia makes her fateful wish.

There are two clunky bits of dialogue which written down don’t seem so bad but maybe Nick Brendon’s teeth made it difficult for him to deliver them well: "You love all the parts." and "We really are living in a golden age."

"Look, I'm sorry this is hard for you. But I told you what I need. So, I can't help feeling like the reason you want to talk is so you can feel better about yourself. That's not my problem." - the way Seth Green as Oz delivers this makes it seem much less harsh and makes Oz seem like the wisest teenager ever.

"That didn't work. Who wants chocolate?"

"Hmm. Buffy. Ooo. Scary." "Someone has to talk to her people. That name is striking fear in nobody's hearts."

"Why don't I just put a stake through her heart?" "She's not a vampire." "Mm, well, you'd be surprised how many things that'll kill." - Buffy is extremely Faith like in this episode...

"World is what it is. We fight. We die. Wishing doesn't change that." "I have to believe in a better world." "Go ahead. I have to live in this one."