This had the feel of a season one episode and really isn’t very good apart from the scene between Willow and her mother.

Clearly, teamwork is a metaphor for forgiveness because after this episode there isn’t any more tension between Oz and Xander.

Sorry to bang on about Cordelia but now I remember why didn't like her much first time round; all I can remember is the horrible scenes she has in the second half of season three.

“No. It's just... This hall is about school, and you're about home. Mix them, my world dissolves.” (Buffy obviously did well in chemistry)

“Oh, I should say it's just beginning. Fight it if you want. Just remember, lift a finger against me, and you'll have to answer to MOO.” “Answer to MOO? Did that sentence just make some sense that I'm not in on?” “Mothers Opposed to the Occult. A powerful new group.” “And who came up with that lame name?” “That would be the founder. I believe you call her Mom' (Snyder is such a meanie and relishes these moments of superiority which he dishes out with such condescension)

“Mom, how would you know what I can do? I mean, the last time we had a conversation over three minutes, it was about the patriarchal bias of the Mr. Rogers Show.” (I don’t get the reference but it’s funny)

“Mom, I'm not acting out. I'm a witch! I can make pencils float. And I can summon the four elements. Okay, two, but four soon. And I'm dating a musician.” “Oh, Willow!” “I worship Beelzebub. I do his biddings. Do you see any goats around? No, because I sacrificed them.” “Willow, please!” “All bow before Satan!” “I'm not listening to this.” “Prince of Night, I summon you. Come fill me with your black, naughty evil.” (“black, naughty evil” – both funny and shivery)

“Okay, so I battle evil. But I don't really win. The bad keeps coming back and getting stronger. Like that kid in the story, the boy that stuck his finger in the duck.” “Dyke.” (look from Buffy) “It's another word for dam.”

“I don't know about you, but I'm gonna go trade my cow in for some beans.”

“She couldn't do us first?” 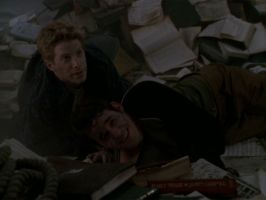