If I was at full Slayer power, I’d be punning right about now.

This episode was rather annoying me at the beginning with Giles’s behaviour making him appear to be rather a hypocrite following his comments to Buffy in Revelations. I felt the time for Giles’s doubts as expressed to Travers should have been made before administering drugs to Buffy. However, when we see that Giles is as helpless as Buffy when it comes to the Council the episode does fall into place. But…I don’t really care about the machinations of the Council and its patriarchal attitudes. And I do care that Giles's “father's love for the child” results in Wesley turning up.

Jeff Kober was an exceptional villain; he has the right idea in wanting to turn Buffy rather than simply killing her and the chase in the house is tense and spooky.

Buffy playing with the long, thin crystal after her workout with Angel was amusing but unnecessary. 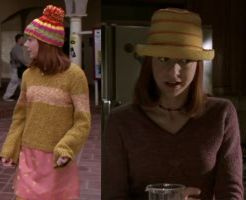 What were they on? It’s southern California not Nebraska. I find it unlikely but did AH have dandruff?

“You're not getting the big picture here. I have no strength. I have no coordination. I throw knives like...” “A girl?” (what?)

Xander and Oz geek over Kryptonite.

“Cause I could see your heart. You held it before you for everyone to see. And I worried that it would be bruised or torn. And more than anything in my life I wanted to keep it safe. To warm it with my own.” “That's beautiful. Or taken literally, incredibly gross.”