The count of three isn’t a plan. It’s Sesame Street.

The costume designers have gone mad again. In order to totally underline the contrast between Faith and Buffy, they book-end the episode with Buffy dressed like she is either going to church with her mother or she is her mother but in the middle of the episode when she is a bad girl, she’s in leather. 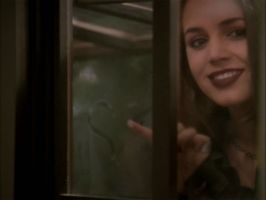 Wouldn’t you blow off a class
for someone who drew hearts on the window
and smiled like that?

Yeouch, that is one awful looking villain: yuck all round and boring too.

"Is he evil?" "Not in the strictest sense": Wesley is treated very rudely at first as if the others already know what an irritant he is going to be. It might have been better if their behaviour towards him changed through the episode as he comes genuinely annoying with the added bonus of the unattractive trait of cowardice.

"I hate it when they drown me": I didn't like the drowning sequence; it seemed silly, pathetic and her hair isn't wet enough. 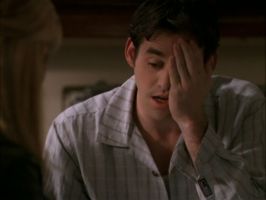 The highlight of the episode is Xander’s twitching eye and he says “you know” in a sweet way.

As a mother, I totally get Joyce’s comment about things not being calorific if they are made for someone else: chips for Adam and just a few for me (no harm done).

Clearly, Buffy blowing off Willow for Faith is to show that if she deserts her oldest friends he is going to get into serious trouble; robbing a store is nothing compared with getting involved in aiding and abetting manslaughter. And it is manslaughter, not murder. 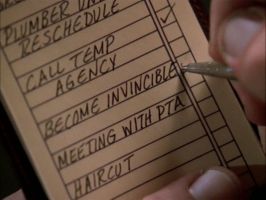