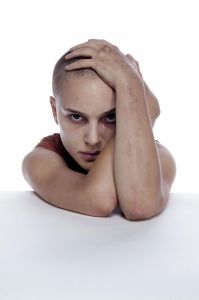 Having just finished the graphic novel it was perhaps a mistake to view the film so soon after. It is hard to separate novel from adaptation without just sounding like a whinger but, whatever, the film is a failure.

Some changes are inevitable in any adaptation but when so many are made you think what's the point in even bothering? V for Vendetta is crying out to be made as a tv series.

Natalie Portman was fine as long as you accept the change in her character from match factory girl so desperate that's she willing to prostitute herself to middle-class already radicalized white collar worker. I'm not convinced she would risk so much at the beginning for an evening meal with Deitrich though. Additionally, I don't believe she would sell out V to a paedophile priest (no matter how suspicious she was of V); there was a clue, Evey, in the child's clothes you were wearing that the priest wasn't quite trustworthy.

I wonder how much of this film is spoilt because I am British but all those cosy middle class families watching tv while the working classes were darn the pub was annoying: isn't The Royle Family on BBC America?

The film fell apart in the last half an hour: V was no superhero and "knife time" was just stupid. I know V had been preparing his attack for several years but I'd like to know how he mass produced all those masks. Finch's "I went to Larkhill" was totally shoe-horned in and made no sense. As well as mass producing masks, V also managed to lay some underground train tracks and make invisible fireworks and demolition material for the Houses of Parliament.

Still, it wasn't all bad: my favourite moment is that Evey's first complaint after realising who tortured her was to say "you cut my hair" and, oh yeah, "you tortured me".