In the spirit of this interview with Joss Whedon, Brian K. Vaughan and Jeph Loeb at Wizard, here are my equally important answers:

FAVOURITE BUFFY STORY: This Year's Girl and Who Are You. Faith wakes up from her coma and tries to get revenge but ends up gaining insight into herself. Sarah Michelle Gellar is awesome and there are at least three fantastic scenes: "I could squeeze you until you popped like warm champagne", Tara and Willow do a spell and Faith and Buffy have a very important fight.

LEAST FAVOURITE BIG BAD: Adam. He was so boring.

FAVOURITE SEASON: Despite my low opinion of the Initiative (as embodied by Forrest and Graham) and of the tedium of Adam, season four is my favourite season because it has so many good episodes, Spike was funny, it re-introduced Anya and introduced Tara. Roll call: Fear, Itself, Wild at Heart, Pangs, Something Blue, Hush, A New Man, Who Are You, New Moon Rising, and Restless.

BEST LAUGH-OUT-LOUD BUFFY MOMENT: Hmm, how to choose from so many? Spike taunting Angel behind Joyce's back in Lovers Walk? Willow wanting Xander to be her first in Bewitched, Bothered and Bewildered? The Scoobies mourning Willow in Doppelgangland and their reaction when she turns up? Xander thinking about sex in Earshot? Giles chasing after Professor Walsh in A New Man? Buffy and Spike engaged in Something Blue? The overhead projector scene in Hush? Spike realising he's English in Tabula Rasa? Willow's hats? I really can't decide.

(and instead of CHARACTER YOU’D LIKE TO DATE) BEST BUFFY MOMENT: Tara and Willow clasping hands in Hush and together moving the vending machine. 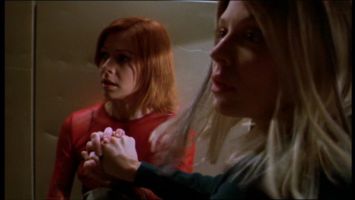 I am dismayed by Jeph Loeb's comments: "There were times I enjoyed “Angel” more than I enjoyed “Buffy.” That may just be a male thing; sometimes Joss’ feminist manifesto would get to me, whereas “Angel” was just a big rollicking detective show with great characters." I don't care that he prefers Angel but I do care that "Joss' feminist manifesto" bothered him. First, having a female leading character doesn't equal feminist and second, just how exactly does this "manifesto" manifest itself?