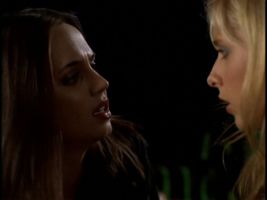 The yearbook thing and the graduation ceremony to the tune of Land of Hope and Glory (I mean, Elgar's Pomp and Circumstance March No. 1) is all a mystery to us on this side of the Atlantic. We just leave school after we finish our exams and that is it.

Anyway, poor Amy, as much as it sweet that Willow and Oz get it on at last, she hardly deserves to get to watch and listen. And it's typical that Willow gets to spend most of the two episodes in a peach top but we do get to see her on a bike.

"Men like sports. I'm sure of it." "Yes. Men like sports. Men watch the action movie, they eat of the beef, and enjoy to look at the bosoms. A thousand years of avenging our wrongs and that's all you've learned?" "I'm trying, okay? You don't need to take my head off." Oh Anya, you have four more seasons of these patronising put-downs to put up with.

It happens a lot in BtVS when characters make decisions for others: in this case, Buffy decides for Joyce. This was probably so the writers didn't have to write anything for Joyce to do.

I don't really like the scene when Buffy mutinies partly because I dislike making somebody who hasn't done anything wrong (except being annoying and pompous) into the bad guy and also have him say the only thing that makes sense. Buffy prevails in spite of all the bad decisions she is constantly makes.

Willow loses her ability to type as Oz plays with her hair. The same doesn't happen with Tara in The Yoko Factor, which is either a very valuable pointer to the difference in their relationships or just the programme makers shying from making the latter relationship too blatant or maybe me trying too hard.

Faith is eating red vines and probably would be smoking too except maybe she isn't as evil as Angelus. The mayor loves Faith. “Well, I'd get set for some weeping if I were you. I'd get set for a world of pain! Misery loves company, young man, and I'm looking to share that with you and your whore!”

Metaphors sometimes work…Buffy makes Angel drink her blood and this scene is way hotter than any soft focus heavy breathing nonsense we’ve had before (and have in the future).

When I don’t like Xander, I hate him: “Well, it’s just good to know that when the chips are down and things look grim you'll feed off the girl who loves you to save your own ass.” – just, shut up, you don’t know anything.

“If I need someone to scream like a woman I'll give you a call.” this sort of line really bugs me – Buffy screams like a woman in Hush. 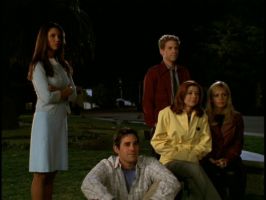