Look it up: Slayer comma the

Since this episode is decidedly average maybe it was the reason why Jane E gives this advice in her blog.

This is the Spike in naff clothes episode and the best things about it involve Spike: his attempted suicide and Willow and Xander’s words of “comfort”, his fun in winding up Xander and Willow (“Or you’re just the same tenth grade losers you’ve always been, and she’s too much of a softy to cut you lose”), his delight at being able to hurt things (“That’s right. I’m back. And I’m a BLOODY ANIMAL! Yeah!”), his American accent, and 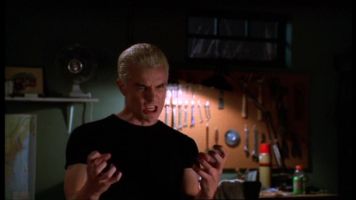 his final desperation for action: “What, can’t go without your Buffy, is that it? Too chicken? Let’s find her! She is the Chosen One after all. Come on! Vampires! Grrr! Nasty! Let’s annihilate them. For justice, and for, the safety of puppies, and Christmas, right? Let’s fight that evil! Let’s kill something!...Oh come on!”) Adam loves Spike.

Okay, there’s lots of stuff about Riley and Buffy but romance isn’t my thing though I admit I like Riley calling Buffy on being self-involved. I think one of my problems with Riley (as well as the screenwriters inability to think of what to do with him in season 5) is that Marc Blucas is too tall and spends all of his time looking down at Buffy and holding her shoulders.

There are a lot of stupid things in this episode that do my head in in an Angel way e.g. Riley supporting Buffy in the crack of doomed without tearing his hands apart and the actual breaking of the laws of physics so that she caught up with the falling demon.

And Willow really needed to go a party with lots of mean straight people smooching.

The best lines belong to Giles and ASH's impeccable delivery: "My contrition completely dwarfs the impending apocalypse" and "Oh, as usual, dear".