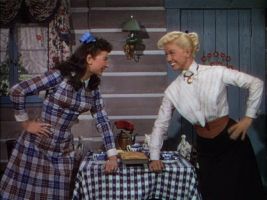 I’ve decided to change the name of my How am I different category to Female thinking because it’s a more accurate reflection of the contents. I don’t really know what the Aimee Mann song is about, plus, "Female thinking" is ironic because it’s what Bill Hickok says to Calamity Jane when she’s mooning over some stuffed shirt (the worst thing about CJ is the wooden (stuffed and wooden?) Philip Carey). I have loved and enjoyed Calamity Jane for many years but only recently has my attention been drawn to the entirely lesbian interpretation that can be brought to it. A Woman’s Touch indeed.

Howard Keel who made me swoon as Clayton Farlow in Dallas (I know, I know, but old Sean Connery is a handsome devil too) has been in three films with exceedingly questionable sexist attitudes : Calamity Jane, Kiss Me Kate and Seven Brides for Seven Brothers (I reckon the latter set the ball rolling for feminism) but I forgive him because of that rumbling baritone and those tights in Kiss Me Kate.

I must mention a couple of blogs that have caught my attention. The first I came across today which is the wonderful riposte to the vile and abominable Observer Woman monthly magazine which is an insult to women everywhere. It’s called Observer Woman Makes Me Spit which says it all.

Secondly, I have to love anybody’s blog whose About Me says “I'm a misanthropic humanist. While I'm a do-gooder by training and profession, I sort of also loathe people.” but there’s more! The very funny Suzanne Reisman is the founder of CUSS which is not the most attractive of acronyms but I'm a CUSS supporter. As she says "Feline pussies with fur are nice to stroke. Hairless cats are freaky." She also wrote this very good article on being Mrs. Husband: "It is strange to me that a woman would invest so much time in her education and work life, building a reputation and accruing respect for her achievements under one identity, and then suddenly become (sort of) someone else."