I totally get it now. Can I have sex with Riley too?

Riley is confused and is going cold turkey: all he understood has been ripped up and scattered: he doesn’t know what to do.

Michty me, Adam was dull wasn’t he? I do believe I may have elided him from my memory along with season five’s knights.

Emma Caulfield is a joy to listen to: Buffy; “Maggie tried to kill me.” Anya: “It didn't work but they're all upset anyway.”

The scene in the basement as morning comes is classic ensemble BtVS: the Wile E. Coyote comments (“That would never happen.” “Well, no Buff. That's why they call them cartoons, not documentaries.”), Giles and Anya bitching (“Well, look who's cranky bear in the morning.” “Yes, I can't imagine why I didn't sleep well in my beach ball.” 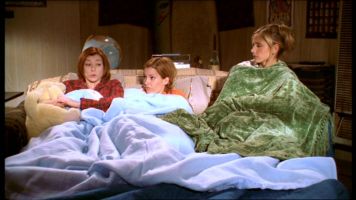 “Every time you moved it made squeaky noises. It was irritating.” “Really? I'm surprised you could hear it over your Wagnerian snoring.”), Anya’s possessiveness over Xander and Buffy’s “yummy sushi pajamas" speech. 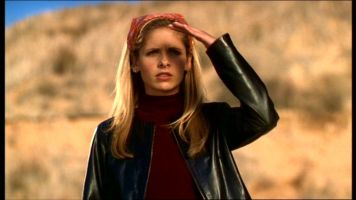 Andy was chortling over this: “No, you don't have to explain. I don't mind, really. I've been thinking about that last spell we did...all day.” Chortling: like Xander in Restless.

Xander’s military experience sure was handier than Buffy’s helpless lady but the scriptwriters via Anya at least make us realise it’s a smidgeon silly: “He's the only one with military experience.” “It's not like he was in the 'Nam. He was G.I. Joe for one night.”

Tara does a daft and dangerous thing but I’ll discuss that and the second daft thing she does when I get to Family.

Sometimes the jokes are tasteless (and not very plausible, Xander the guy who reads comics wouldn’t know retinal?): “Sorry. I'm the only one that can pass the retinal scan.” “The… ewww. I don't want to see that.” “Retinal scan, Xander.”

So that’s why she was wearing that bandana so Riley can wrap the grubby thing around his wounded hand in a military hospital.