I have seen some scenes many, many times but overall too much of this episode is poorly thought out and developed.

Oz can’t control the wolf when he’s affected by strong emotions like jealousy or pain and so even if Willow had decided that she wanted to be with him that couldn’t have happened.

However, even if you didn’t know Seth Green had decided to leave the series the evidence is there in the episode that Willow would choose Tara. There is no woo or hoo because despite it being Oz (you know) she is not thrilled about his return which is why she chooses waffles and whatever happens during the cardigan swapping scene makes Oz’s nose tingle.

The acting in this episode is tremendous: we expect the best from Alyson Hannigan and Seth Green but Amber Benson is wonderfully touching (stutter notwithstanding). The scene between Oz and Tara is tense and exciting and you can feel their individual pain acutely and I love that even in his anguish he warns her to run.

My version of the Tara and Willow story is that Tara is totally smitten with Willow as soon as she sees her: it is love at first sight. In fact, Tara actively pursues Willow and is rather forward when she tells her she is special in Hush. Consequently, what she does in New Moon Rising is self-sacrificial and brave (she even says she wants to be Willow’s friend no matter what) and noble.

I understand there are some people who think the opening scene is a bit cute and sick-making but I think it's so sweet. And they hold hands! 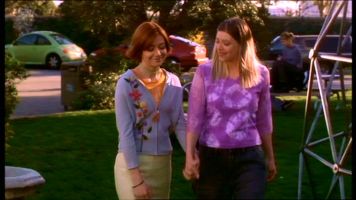 "I'm overhelping, aren't I?" I do regret not calling this blog overhelping but I can't change it now because a search on Google with the keywords let's fold scarves brings up his site first.

More snark between Anya and Giles and then Oz turns up: "Oz" breathes Tara as the happiness swooshes out of her body. 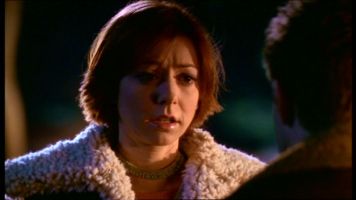 Willow is a witch and interested in Wicca and there is no way she wouldn't have realised it was a full moon. Alyson Hannigan is very, very good: listen and watch as she says "No. No new... guy." And oo, a green choker alert. 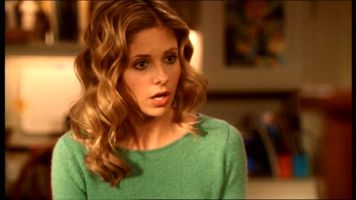 The scene between Willow and Buffy when Will comes out is superb: just perfectly written and acted:

Apparently, other stuff does actually happen in this episode like Riley quits the Initiative and Buffy steels herself to actually tell him about her relationship with Angel ("an unconventional relationship", indeed). 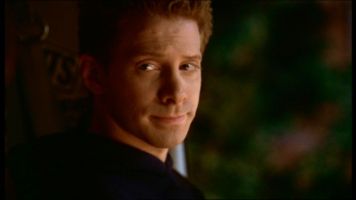 And this is now it ends and it is adorable: