She’s crafty. Her and her little friends.

Riley says that Buffy told him this about Angel: “Everything. More than I wanted to know sometimes. She loved him. He turned evil. He, uh, killed people. She cured him. He left. Interesting little curse.” and then when Xander mentions “One moment's happiness.” he gets upset. Therefore that means that Riley is more upset about the sex than the love...which is bonkers.

Spike’s work on the Scoobies is very clever but the position they have got themselves into over the season has helped a great deal. Buffy not wanting to talk about Angel is annoying but reasonable behaviour for her in season four.

What is Doug Petrie on? First the Riley misplaced jealously and now Willow wanting to study drama? Hello, Nightmares?

I don’t like Forrest but this is pretty accurate: “Such a big head on that skinny little body.”

Of course Willow (“I knew Buffy was freaked.”) ignores the wise advice from Tara “You should talk to her, cause I'm sure she…” in favour of presuming the worst. (Aside: Buffy et al, actually take Willow’s outing very well, much better than you would expect from people who had little clue that she may be gay and much better than many fans of the show.)

The scene in Buffy’s dorm room between Riley, Angel and Buffy is funny and very well played by the trio.

Adam in funny moment: “Don't tell me you've never heard of the Beatles?” “I have. I like Helter Skelter.” 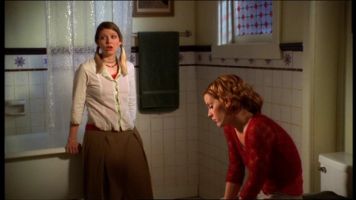 "Like the tile." A lovely moment between the two outsiders.

"Bloody hell!" Giles (or should I say ASH) makes a great drunk.

"So...I guess I'm starting to understand why there's no ancient prophecy about a Chosen One...and her friends." The yelling and fighting is almost funny except that it's too sad and close to the bone.

This episode ends on a cliffhanger and has a definite air of being incomplete in all other ways too (issues that are a bit too easily glossed over in the next of the series). And I still need to know just how cold are the evenings in SoCal?