This is Xander’s Dopplegangland. And while it is not the classic that DGL is, it is certainly a well made episode with great performances from Nicholas Brendon (and his twin brother, Kelly). It takes a while to get up to steam but the last ten minutes are hilarious. 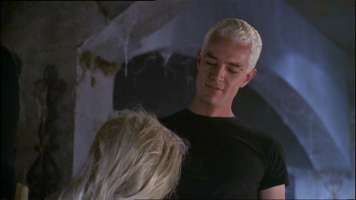 Spike and the mannequin. It was funny when I first saw it but I was innocent then.

"Right. There comes a point where you either have to move on, or just buy yourself a Klingon costume and...go with it."

And in the same episode that Buffy's hair looks this nice. 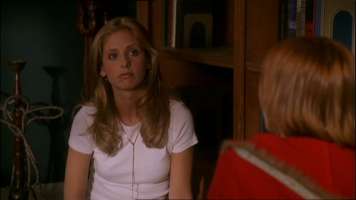 She wears a Neapolitan ice cream inspired top and these (shudder) trousers.

The Snoopy dance: forever imprinted as the sweetest Xander moment.

“But I never help. I get in trouble and Buffy saves me.” “That's not true! Sometimes we all helped save you. And sometimes you're not in trouble.” (examples please!)

“Hey, wait till you have an evil twin. See how you handle it.” “I handled it fine.”

Xander’s conversation with Anya makes me very cross, even though Hell’s Bells is a long way off.

I was moaning to Andy (after Out of My Mind) about the evidence to prove that that Buffy doesn’t love Riley and, oops, here it is:

“Riley, do you wish” “No.” “No? You don't even know what I was gonna say.” “Yes, I do. You wanted to know if I wished you got hit by the ferula-gemina, got split in two.” “Well, you have been kind of rankly about the whole slayer gig. Instead of having slayer Buffy, you could have Buffy Buffy.” “Hey. I have Buffy Buffy. Being the slayer's part of who you are. You keep thinking I don't get that, but...” “It's just ... I know how ... un-fun it can be. The bad hours, frequent bruising, cranky monsters...” “Buffy... if you led a perfectly normal life, you wouldn't be half as crazy as you are. I gotta have that. I gotta have it all. I'm talkin' toes, elbows, the whole bad-ice-skating-movie obsession, everything. There's no part of you I'm not in love with.”

“No, I ...huh. It is kinda cool. Washington's still there, but he's all smushy. And he may be Jefferson.”

This joke is done again and again (I mean, the Giles’ distaste) but funny:

“Well, maybe we shouldn't do this reintegration thing right away. See, I can take the boys home, and ... we can all have sex together, and ... you know, just slap 'em back together in the morning.” “She's joking.” “No she's not! She entirely wants to have sex with us together. Which is ...wrong, and, and it would be very confusing.” “Uh, uh, we just need to light the candles. Also, we should continue to pretend we heard none of the disturbing sex talk.”

“What'll we do if this doesn't work?” “Kill us both, Spock!” “They're...kinda the same now.” “Yes, he's clearly a bad influence on himself.” The look on "their" faces as they realise what they said is priceless.