Not everything is about your friends and stuff 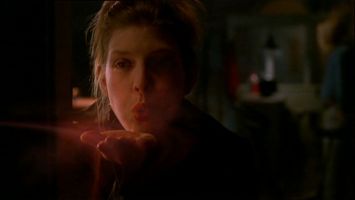 A Tara episode. I should be delighted but unfortunately this more Amends than Doppelgangland. And it is also signals the end of any interest the programme makers had in Tara as a character for the rest of the season until The Body and Tough Love (and that was only to kick off Dark Willow).

The opening scene between the two is sickly though we do get the joy of "vixen" and, gasp!, snuggling.

No! No! You can write a feminist text without making men such bad guys and it is particularly galling when the man in this case (Buffy's father) has been rewritten so that all older men are bad except Giles and even he leaves...

Xander and Riley play fighting is so cute: "...and are a complete dork." "Oh, then how come Xander didn't laugh?" "I don't know that Taglarin stuff."

My heart aches for anyone who is insecure and makes a bad joke or a stupid remark - I've been there. "Stupid."

The conversation between Buffy and Xander about Tara seems mean but does make sense: she's shy, she's hiding a huge secret, she's getting to know her new girlfriend: they don't know her at all and she's a lesbian Wiccan. It really won't be "the most thrilling social event of the season."

Spike and Harmony having sex: poor Adam will have his eyes closed for quite a bit this season (I'm kinda hoping he'll have lost interest by the middle of season six). 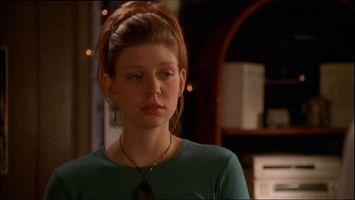 The metaphor couldn't be clearer: "It, it doesn't feel evil, sir." "Evil never does."

One scene doesn't sit right with me and that is Willow leaving Tara alone. Tara is clearly upset and snaps at Willow and Willow doesn't put up much of a fight as she buggers off. It feels contrived just so Tara can cast as spell on all the Scoobies. (And she seems to get to the Magic Box really quickly.)

Future Oscar nominee sighting: the scene between Tara and Beth is superb and I still wince when Beth calls Tara a bitch. And this doesn't seem that unreasonable: "Don't you see how out of control you are? You've been lying to these people for a year, and now you've put a spell on them, is that right? Is that a human thing to do? Now I'm telling your father. If he doesn't force you to come home, and I think he should, I know he's going to tell your friends the truth. If I were you, I'd tell them first. And then I'd tell them good-bye." 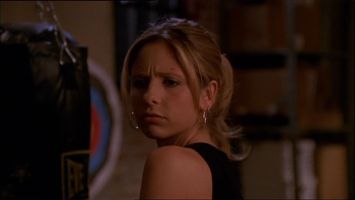 The fight in the Magic Box is well done. "I've already been injured once this month!" But why does Mr Maclay fall over?

“You want her, Mr. Maclay? You can go ahead and take her…You just gotta go through me.” “What?” “You heard me…You wanna take Tara out of here against her will? You gotta come through me.” “And me!” “Is this a joke? I’m not gonna be threatened by two little girls.” “You don't wanna mess with us.” “She's a hair-puller.”

I usually have a heart of stone over scenes like the following but what the hell: “I still can't believe you didn't tell me about your family and all that.” “I was just afraid if you saw the kind of people I came from, you wouldn't wanna be anywhere near me.” “See that's where you're a dummy. I think about what you grew up with, and then I look at what you are. It makes me proud. It makes me love you more.” “Every time I…even when I'm at my worst...you always make me feel special.” “How do you do that?” “Magic.” 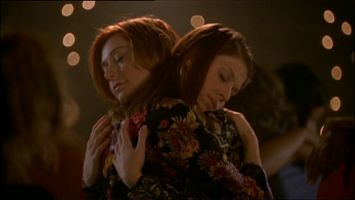 Some complain that Tara's family is one dimensional but I think they are painted rather richly in such a short time on screen. And let's face it, Tara wouldn't be Tara without a one dimensional family to beat her down and make her so. Cousin Beth is appalled by Tara's actions and who can blame her? Tara gets to escape and do what she wants, live how she wants while Beth has to conform and be stifled and that hurts. 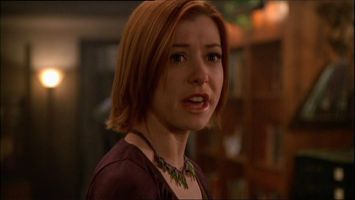 Alyson Hannigan/Willow has been annoying me this season being unconvincing and irritating. She is better in this episode because she has a bit more to do: her disappointment when Tara doesn't introduce her to her family and her angry "I know that!" are two highlights.

Amber Benson is gorgeous throughout even in that skirt and top at the end. But that's irrelevant. She gives a rather wonderful performance (Joss really really gets the best out of her): her embarrassment at being a dork, her stutter returning, her tears, her cringing, her delight and her new found courage.

I'm unhappy with what Tara did in Goodbye Iowa because she could have been responsible for people's deaths. Ditto in this and the gang are awfully forgiving of such reckless behaviour, family or not. Considering how she is later portrayed as being the moral centre of the gang it is strange that such uncharacteristic and foolish behaviour is whitewashed. It can be argued that she was scared and wasn't thinking straight but I feel her morality should have overridden her selfishness. It's also a problem that Willow doesn't seem to mind at all that Tara lied to her for so long. I would be less forgiving and I certainly would have brought it up later in any argument...(I'm looking at you Tough Love). It should be a real difficulty for fan fiction writers but most of them ignore it. So if you know a good fiction which explores this sticky moment then let me know.