There is a thread on TWOP called I love Kennedy!: Unpopular Opinions about Buffy in which, well, people voice unpopular opinions of a controversial nature such as Dawn wasn’t that annoying, Beer Bad and Where the Wild Things Are are really not that terrible (and they really weren’t) and Hush isn’t that great because it has a whole section without dialogue (!?). It’s currently at 119 pages and I presume somewhere in there is a person or two who thinks Fool For Love is not that great.

Buffy is off her game and Riley saves her. He is not content until he has wiped out the nest. These two things were interesting. Buffy’s need to know more about former slayers is believable (but Watchers don't keep records?) and much of Spike’s past is amusing (if humiliation is funny) but otherwise, shrug.

Willow, Xander and, to a lesser degree, Anya’s behaviour is appalling. Not just in itself, which is disrespectful and rude, but in the terrible things done to the characters: four seasons of Scooby responsibility thrown away for cheap laughs.

It’s clear that many people love back story and care about Darla, Angel, Drusilla and Spike’s past but I don’t. I really don’t. I’m certainly affected by the laughable nature of the historical scenes with their poor wigs, inauthentic dialogue (“bloody” in polite society?, railroad spike and purse) and poor attention to detail but even if that was great I'd still be bored (I feel I'm a bad BtVS fan for saying that b word). 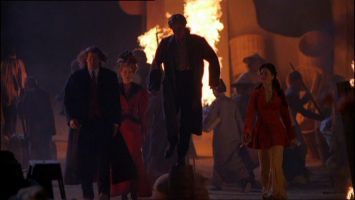 And have a strong apathy to slow motion (in most cases it is an annoying gimmick e.g. the shootout in Road to Perdition and that bloody pram down the steps in The Untouchables) particularly if all it does is highlight the bad wigs.

Good things: the fight with the New York Slayer and the look of absolute confusion on Buffy’s face as Spike comforts her.

"I do see you. That's the problem. You're nothing to me, William. You're beneath me."

"You ever hear them saying the blood of a Slayer is a powerful aphrodisiac?"

"Every Slayer has a death wish. Even you. The only reason you've lasted as long as you have is you've got ties to the world. Your mum, your brat kid sister, the Scoobies. They all tie you here but you're just putting off the inevitable. Sooner or later, you're gonna want it. And the second...the second...that happens. You know I'll be there. I'll slip in. Have myself a real good day." - a touch of foreshadowing