Vampires are vampires. And my job description is pretty clear

Into the Woods (Marti Noxon)

Alas not the musical or the children’s book but a Marti Noxon blood boiling special. I apologise in advance for getting so cross.

Riley is the fourth major male character who gets to leave Sunnydale without having to die.

It starts off okay with Joyce and the all-clear and the nice scene with Xander, Anya and Dawn: “Well, we could play that game again, Life. That was fun.” “For you. You always win.” “Well, we can make a wager this time. You can give me real money. That would be different.” “And after we teach her to gamble, maybe we can all get drunk!” “I don't think the bar would serve her, but we could bring something in. Strawberry schnapps taste just like real ice cream.”

Then there is the sex bit. Then there is scene in the Magic Box setting up the events in Triangle. All okay: amusing and/or reasonable.

Good line from Giles: "No longer a victim of crass holiday commercialization, I'm...a purveyor of it."

Then one of many hard to believe scenes: why doesn’t Riley kill Spike? I know the real answer is that James Marsters is very popular and he’s funny and sexy and not Marc Blucas. But in terms of drama: why does he stake him and not kill him? 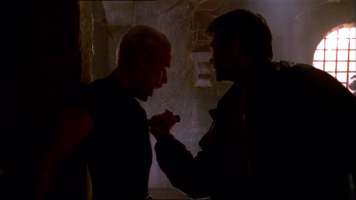 I do believe that I never praise James Marsters as Spike but he is great. In this episode he has the funny “are you naked under there?” and the smirking at Riley, the subsiding terror of nearly dying, the frankness of “sometimes I envy you so much it chokes me” and he is charismatic throughout. Despite all Spike's dreadful behaviour, he's a charmer.

Spike is right: of course, Riley is not Buffy’s long haul guy but that isn’t her fault: right guy, wrong time. It happens.

The scene between Buffy and Riley is well acted and what Riley says is so wrong that Buffy can only respond negatively. Riley says the vampires needed him in a way that Buffy didn’t: say what? They are desperate not needy. Even vampires are humiliating themselves when they sell themselves like this. It is not a healthy transaction.

I do believe that he believes what he’s saying except when he asks her to hit him which is just odd to me (perhaps I’m sheltered). Does he think if she hits him that means she cares? Does he want her to hurt him? I dunno.

She rightly refuses to accept his ultimatum and that would be okay if the episode ended there. But then we have to put up with the intervention of Xander which is the scene that makes me want to thump the screen, just like the Xander scene in Dead Man’s Party because if there is anything I like less than patronising Xander it’s self-fucking-righteous Xander. 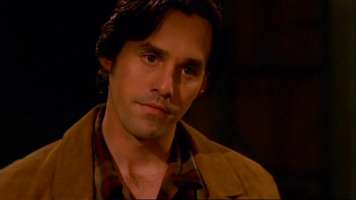 The episode is partly redeemed by Xander’s speech to Anya which at least shows he was listening to himself.

Is it me or are Marti Noxon’s scripts incoherent? Characters do and say things that have an effect on others when they shouldn’t. And things happen that make no sense. New Moon Rising is a good example of this.