Willow, maybe we should just pay.

I like Jane Espenson. Some of the funniest episodes, scenes and lines have been written by her. However, based on Pangs and Triangle, she seems to really dislike Willow. Willow is just an utter cow in this episode. She’s not funny (well, she is but I didn’t mean to laugh), she’s mean and selfish. I’m also tired of women bitching with each other over men. What I loved about Homecoming was that Buffy and Cordelia were bitching over each other: in this it’s the usual rubbish.

And as for Tara and Willow’s reunion in the Bronze! “Reunited” is a strong word when they don’t touch other and Willow doesn't even acknowledge Tara. Perhaps Tara was horrified to find the girlfriend she was so worried about is still behaving atrociously and decided there’s no way I’m hugging that. More to the point it feels like that they are not allowed to show affection in front of others even though they are allowed to be affectionate with non-partners.

The episode opens with Xander moping that Riley has left and that "relationship debris is kind of piling up on the Buffy highway". I don't think it's supposed to be insulting, it's just meant to contrast with Buffy in a nunnery but we are not off to a good start.

"We can come by between classes! Usually I use that time to copy over my class notes with a system of different coloured pens. But it's been pointed out to me that that's, you know, insane." "I said 'quirky.'"

Spike and the mannequin is once again funny. It's also cool that the chocolate box he smashes up here is the same one he brings for Buffy's birthday in Blood Ties.

I can't actually bring myself to think any more about the scenes between Willow and Anya except the "hello, gay now!" remark which beautifully delivered and funny but seems to suggest that there is a gay switch and that you are one or the other.

The scene between Tara and Buffy would be perfect if SMG wasn't quite so strained with the tears but as it is I love her illogical panicky inferences and poor Tara's struggle to stop Buffy losing it. 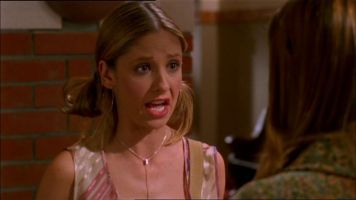 Olaf has funny lines: "Puny receptacle!" "Barmaid! Bring me stronger ale, and some plump, succulent babies to eat." and my favourite bit "You there! Do you know where there are babies?" with Spike's reply "What do you think, the hospital?" and "What are you fighting for, minuscule blonde one? Your friends? These two? They will never last. Anyanka is very difficult to live with, and he is ludicrous and far too breakable. Their love will never last." (I wish he had mentioned Tara and Willow)

Spike is trying so hard: "What are you doing? "Making this woman more comfortable. I'm not sampling, I'll have you know. Just look at all these lovely blood-covered people. I could, but not a taste for Spike, not a lick. Know you wouldn't like it." "You want credit for not feeding on bleeding disaster victims?" "Well, yeah." "You're disgusting."

I want to love Willow again.