I Was Made to Love You (Jane Espenson) 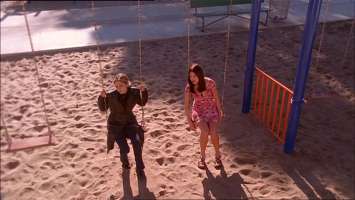 This is such a good episode. It makes you care about the demise of a robot and that is some feat. It also has some of the best dialogue, interactions and smart moments that we have seen for a while. 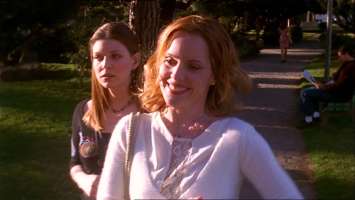 And it's no coincidence that there are lots of nice Tara moments. I do like the opportunities Tara gets as a character in scenes with people other than Willow: she does a super eye roll after Anya describes her website with its "huge photo" of herself. Tara spots April's roboticity before the others which is consistent with her spotting Buffy wasn't herself in "Who Are You?". Her particularly good intuition doesn't go any way to excuse the pathetic behaviour of the others in "Intervention". I'm not sure why she apologises for her "genuine moulded plastic on her ass" line but maybe that's me. Tara is protective of Dawn when Spike comes to the Magic Box and that reminds me that season 8 has such a cheek making out Willow was like a mother to Dawn. I'm not sure I like her being jealous, though. 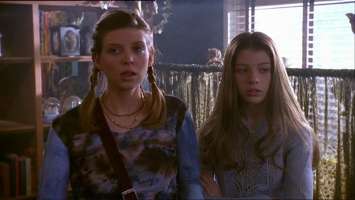 There are two giddy scenes with Joyce that are in retrospect quite cruel. Buffy and Dawn teasing her is fun and I love the scene when Joyce teases Buffy: "I left my bra in his car." "Mother!" "I'm joking." "Good god, that's horrible. Don't do that." "I left it in the restaurant." "No more! No more! No more!" "On the dessert cart!" It seems that even joking about sex in BtVS can lead to death. 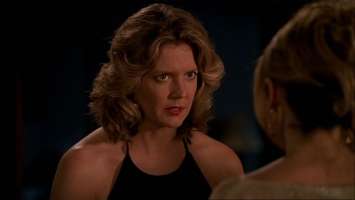 April throwing Spike through a window is just wonderful particularly since he has been so annoying just before: "You cannot make those suggestions to me. I have a boyfriend".

Is Warren such an unusual name? He is a totally "creepy little dweeb" though and I think it was a waste of Adam Busch to have him as part of the execrable trio. 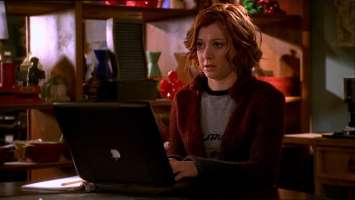 The round table discussion in the Magic Box is a superb example of ensemble acting with each actor giving lovely subtle performances. Alyson Hannigan looks with varying emotions at her embarrassing girlfriend and looks discomforted by Xander mentioning Oz. Nick Brendon burbles on as Emma Caulfield looks on proudly at her self control. Amber Benson makes faces as she tries to say that April may be a sexbot (something Xander manages to say). Anthony Head looks amused and Sarah Michelle Gellar looks pained as she contemplates her life. 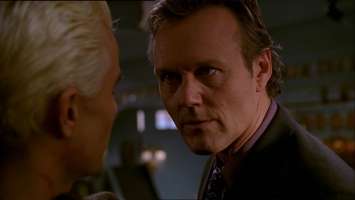 The picture quality in two scenes near the end is abysmal: when Xander talks to Buffy about carpentry and she blows Ben off and when Spike asks Warren to build him a Buffybot. 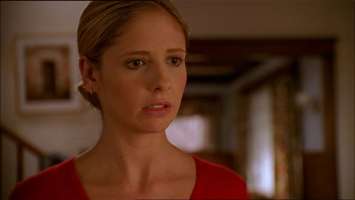