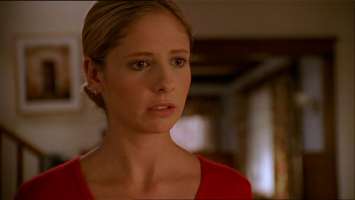 Maybe the best 40 odd minutes of TV ever.

There are certainly consistently good serials like I, Claudius and Edge of Darkness but surely no long running series comes close to producing anything like this remarkable episode. Joss Whedon created three extraordinary episodes in "Restless", this and "Once More, With Feeling" and while episodes like "Hush" and "Doppelgangland" are outstanding they are not as unusual as the aforementioned and even "Restless" and "OMWF" couldn't have been difficult to pitch because they are recognisable as being part of the BtVS world while "The Body" (except for one key moment) is entirely ordinary.

There are some objections to the intrusion of the supernatural but I think the vampire in the morgue is a necessary moment because it clearly states that no matter what happens to Buffy she still has a job to do and nothing should stop her from her duty. She is no longer the same girl who ran away to LA at the end of season two.

There are two things that jar in this: the first time Buffy imagines Joyce's recovery pulls me out of the drama and irritates me as a gimmick and Dawn's tears in the toilets are a heavy-handed way of contrasting adolescent troubles with the real ones to come.

The scenes following Buffy's discovery of Joyce are unsettling: the camerawork and the diegetic sound create an eerie and tense atmosphere reminiscent of a horror film like The Innocents. The small details like Buffy cracking a rib, pulling Joyce's skirt down, throwing up, opening the back door and soaking up the vomit are richly observed.

"We're not supposed to move the body!"

Dawn crying is boring anyway and knowing the real pain to come it is really hard to emphasize. I feel like a rubbernecking car crash spectator as I watch Buffy telling Dawn as if I am one of the pupils watching through the glass.

The dorm scenes have several of the most exceptional moments in BtVS with superb acting from Alyson Hannigan, Amber Benson and Emma Caulfield.

"God, why do all my shirts have such stupid things on them? Why can't I just dress like a grown-up? Can't I be a grown-up?" 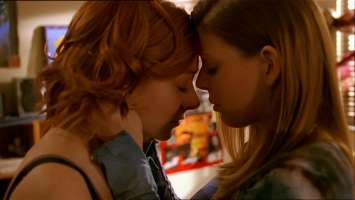 Willow's hunt for a suitable top is payback for all the stupid clothes she has ever worn and ever will wear. She gets increasingly distressed and then Tara does what every lover would do: she comforts her. The kiss between them is quite something on a variety of levels. At its basic level it is the first kiss we see between them and Joss Whedon is smart enough to get the hottest kiss on mainstream US TV by disguising it as a comforting moment. Of course, it's not just a disguise, it also illuminates the relationship between the couple that suddenly doesn't seem quite so one-dimensional. Tara is behaving as a person in her own right, as an equal partner giving her strength and support to Willow. Any complaints about a lack of chemistry between the actresses are surely dispelled when we see them relating in a way that any hetero couple would be seen doing as a matter of course. Anya's angry and confused outburst is perfectly pitched by Emma Caulfield as she speaks for many of us and asks how and why it happened. That downwards inflection she uses in her voice works effectively towards the end as she grows sadder:

"I don't understand how this all happens. How we go through this. I mean, I knew her, and then she's, there's just a body, and I don't understand why she just can't get back in it and not be dead anymore. It's stupid. It's mortal and stupid. And, and Xander's crying and not talking, and, and I was having fruit punch, and I thought, well, Joyce will never have any more fruit punch ever, and she'll never have eggs, or yawn or brush her hair, not ever, and no one will explain to me why." 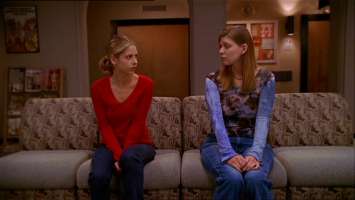 Andy has an interesting idea as to why everyone decides that they need to get food and drink urgently leaving Tara and Buffy alone. They sit there with one definitely thinking "Don't leave me alone with her!" and the other possibly thinking the same when the most beautiful exchange occurs. It is a lovely scene and both of them are tremendously awkward and poignant.

"I'm sorry, you have to go through all of this." "You don't have to worry about me." "Everybody wants to help. I don't even know if I'm, here. I don't know what's going on. Never done this. That's just an amazingly dumb thing to say. Obviously, I've never done this before." "I have...my mother died when I was seventeen." "I didn't know. I'm sorry." "No, no, I didn't mean to...I'm only telling you this because, I know it's not m-my place, but, there's things, thoughts and reactions I had that, I couldn't understand or even try to explain to anyone else. Thoughts that made me feel like I was losing it or, like I was some kind of ho-horrible person. I know it's different for you because it's always different, but, if you ever need..." "Was it sudden?" "What?" "Your mother." "No. Yes...it's always sudden." 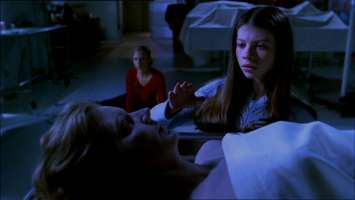 In the meantime, Dawn has been forgotten. She needs to see her mother and she needs to know the truth that her mum has gone. The final shot of her reaching out is the perfect way to end a truly brilliant episode of Buffy the Vampire Slayer. I personally can't see that Joss Whedon will never write or direct anything as honest and heartfelt.

There are a multitude of other points to note or discuss about this episode including Sarah Michelle Gellar's performance but this'll do for now.