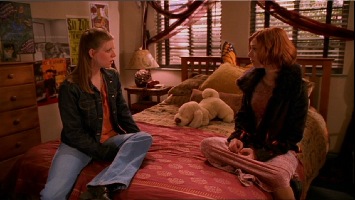 Tara and Willow need to have a fight so that Glory can suck Tara's brain to force the season finale and, of course, bring out pissed off magical Willow.

So they have Willow behave badly again and in a most unsatisfying way.

The fight between Willow and Tara just confuses the heck out of me. It makes no sense and while I appreciate that in real life arguments can leap all over the place and aren't necessarily logical. However, this isn't real life but a carefully crafted script and it doesn't add up without Willow appearing to be looking for a fight just because she feels inadequate, insecure and left out.

She starts off whinging about not having the experience that Tara has accumulated (as if that is well placed jealousy). Tara points out that in terms of magical ability Willow has surpassed her. She says "it frightens me how powerful you're getting" and at this point Willow is justly allowed to be a little miffed by that phrase. Tara tries to defuse the situation but Willow attacks by asking if she trusts her. Tara says yes but admits that she feels inadequate herself because she doesn't know what direction Willow is taking. Willow completing loses my sympathy when she then completely changes tack and asks if Tara is accusing her of experimentation. When she directly asks Tara if she thinks that, Tara is obliged to answer with “should I?” because Willow is the one that suggested it, not Tara. Willow then completes her me, me, me moment and walks out complaining of not being taken “seriously”.

I hate that scene so much.

In other news: Buffy drops out, Glory takes a bath, Anya embraces capitalism, Buffy and Giles have a lovely scene when she tries to evade responsibility which leads to a less lovely scene when she is mean to Dawnie and the human triangles, Giles goes all Ripper (but off screen), and Tara is seen holding hands with another woman.

Anya has a couple of lines in the hospital which marks the start of a period when she was given the most crass lines to say: "I don't think I can sleep without her." "You can sleep with me...well, now that came out a lot more lesbian than it sounded in my head." - a lead balloon.

This is so awful because it is so wrong, unfair and selfish: "When, Buffy? When is? When you feel like it? When it's someone you love as much as I love Tara? When it's Dawn, is that it?"

"I owe you pain!" - great line but the first time I saw black-eyed floating Willow I laughed.

Glory has some good lines: "Now, I asked for the key, and you brought me a vampire. A pulseless, impure, follicly-fried vampire. Loofah!", "Did anybody order an apocalypse?", "Fine. Let's get crazy.", "Now, sucking on your girlfriend's mind? That was something to treasure."

The minions get good ones too: "I am in thunderous agreement, oh glittering, glistening Glorificus." and "Begging your pardon, and begging in general, but..."

And here are Tara's: "They kill mice.", "Plastic and their six sisters. Six sick sisters." and, naturally, "Oh, it's so pure! Such pure green energy!"