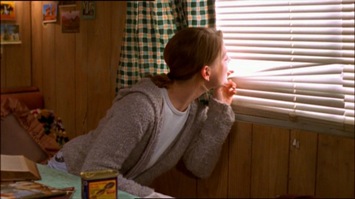 "Horsies!" cries Tara as she looks out of the window of the Winnebago. She may have actually seen a shark and a ramp. I use the word may because BtVS does recover from this but it did colour my first viewing of the rest of season five to the detriment of "The Gift". After the episode in which a bad thing happens to Tara in both seasons five and six, there are one too many episodes (ahem): Dark Willow goes on and on and on while this one shouts out "filler!" The most interesting thing in this episode is Buffy's increasing depression. Her final reaction when she realises the implication of failing to keep her promise to Dawn is understandably one of devastation. 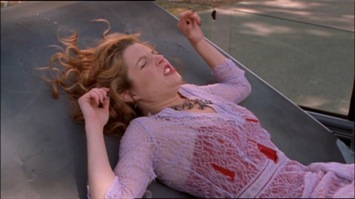 There is a certain enjoyment in Glory being hit by a truck.

Anya has been amazingly bad lines in this: "We should drop a piano on her. Well, it always works for that creepy cartoon rabbit when he's running from that nice man with the speech impediment." (yeah, yeah, yeah, rabbit reference, blah, blah but it isn't funny) and "Shouldn't somebody be asking, "Are we there yet?" No wonder Xander looks sick. Xander spends his time in the Winnebago (is it actually a Winnebago?) looking queasy and doing no fighting whatsoever and that seems a rotten thing to do to his character.

I don't like having a female minion suddenly turn up. It could have been a lot of fun having the male ones not fawning for a change.

Buffy justifies Spike's presence by saying that "If Glory finds us, he's the only one besides me that has any chance of protecting Dawn." which is rather insulting to the be-flannelled one sitting right behind her. 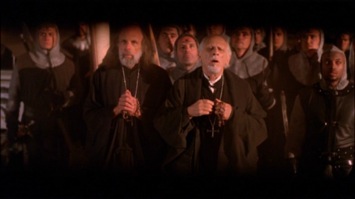 What were they thinking when they introduced the Knights? The idea of them is so naff and awkward and boring and stupid. The clerics hilariously reminded me of the priests in Age of Empires.

It pains me to diss two things I love but Tara in "Spiral" is as annoying as this Tara. Cats get more affectionate as they get older which is bit worrisome.

"Don't hit the horsies!" cries Willow as if she likes them or something. Perhaps, off screen, Tara had indeed guaranteed "safety and fun".

Sorry, it's nitpick city here. However, in "Go Fish" a soaking wet Buffy managed to leap out of a pool and get out of hatch while here she needs Xander's help to get onto the roof of the RV.

I do like seeing Dawn administering to Spike. That does seem like something she would do. I also like Xander being nice to Spike but also managing to pocket his lighter.

In a scene reminiscent of a rotten scene in Serenity, Giles gets impaled, though rather less convincingly (just watch it bounce).

The whole Ben will he?, won't he?, thing just didn't work because Charlie Weber is not a subtle enough actor. It was a relief when Glory turned up.

In summary, Adam enjoyed this very much.