I couldn't take a bigger bite of you 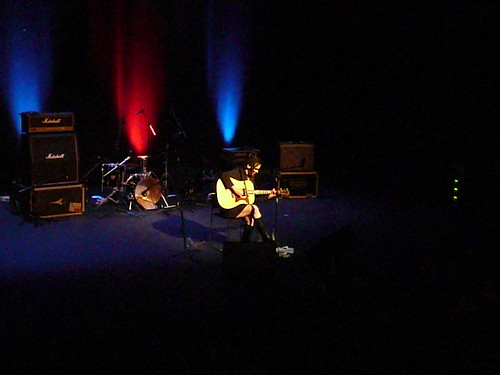 I’m not a big concert goer partly because the experience of being at a gig is generally poor for a woman of average height, partly because not everyone is there to listen with the same devotion as I am and partly because they often don’t offer me anything more than I get from the music at home.

However, I was happy enough to go to Brighton for Andy’s birthday for a Fatcat night at the Theatre Royal (particularly since they were circle seats). Silje Nes was excellent but she didn’t have the same stage presence to go with her amazing music. Frightened Rabbit were a huge contrast and not quite my thing. However, when The Twilight Sad came on with their angsty singer (angsty about what though? I didn’t understand a word) who didn’t need that microphone stand I wanted the Rabbits back. Apologies to all fans but…they ain’t no Nina.

Nina Nastasia came on and I’m pretty sure she gave the best live performance that I have ever seen. At first, with the acoustic guitar and no sign of an accompanist and no sign of foot operated technical wizardry as Silje Nes had demonstrated I was fearful of a performance I would fall asleep to. She asked for requests and I, unbelievably, shouted out (for “Stormy Weather”) and she didn’t hear me so I had to pluck up my courage and do it again. Then she started and got a bit unravelled on the guitar playing and swore and it just didn’t seem promising. However, she then proceeded to sing and play guitar almost impeccably for the rest of a very long but magical night. She was only supposed to play for forty minutes but an hour and a half later (or more) she had to definitely come to a halt when the theatre staff put the house lights up permanently.

I’m rubbish at titles (except “Stormy Weather” obviously) but she definitely sung that, “This Is What It Is”, “Oh My Stars”, “Brad Haunts A Party”, and “You Her and Me” and many, many others in a truly mesmerising, absorbing way.