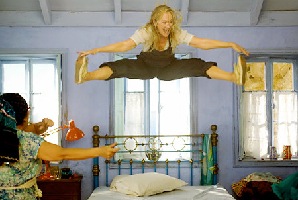 Mammia Mia! is not a good film and for the first twenty minutes or so I was frozen in my seat thinking "why am I here? why? why?" Then there was the exhilarating "Dancing Queen" which culminated with the cast dancing on the dock and I told myself to just let go. So I did and from then on it was an enjoyable film.

The ending made me sigh more than a little (not the very ending in all its campy glory which was fabulous) because I really dislike happy endings equals weddings. In this case it didn't matter who got married it just equals happiness.

Christine Baranski was the highlight for me. I have liked her since she consistently stole the show from Cybill Shepherd and she was made to sing "Does Your Mother Know?" Meryl Streep was just great - she is one of the greats and certainly doesn't lack humour. I must defend Pierce Brosnan's voice. He can't sing too well but he'll never be as bad as Ewan "foghorn" McGregor.

The only feminist thing about this film is the fact it was directed, written, produced, edited and designed by women. 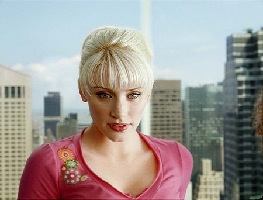 Bloody hell. I appreciate this film was going for the humour but it missed by miles. The clues were in the secretary's buzzing of JJ and in the comedy French maître d' but the nadir was Peter "Saturday Night Fever" Parker and that awful, awful "Fever" dance scene.

The humour wasn't the worst thing about it. There was also the coincidence strewn plot: without knowing Venom's back story just how is the casual viewer supposed to know Eddie Block was a Catholic but even knowing that doesn't explain what Spidey was doing in the church tower. There were too many villains, Peter and MJ's relationship was painful and useless and the acting was abysmal (except Bryce Dallas Howard and Thomas Haden Church).

And it was interminable and it had a retcon and it was rubbish.

Often comedies of stupid behaviour strain my own considerable good humour but this I loved. It helps when it is impeccably played by Cary Grant (surely the best re-actor ever), Myrna Loy (and her big nose) and Melvyn Douglas (who I feel I have neglected).

It is daft and the characters are really too stupid to be successful at anything but it made me smile and laugh throughout. It slipped in a bit of preachiness re housing near the end but I'll forgive it as I will forgive Melvin Frank and Norman Panama for letting Mr B tell Mrs B to be quiet for doing something as daft as all the other things he had been doing throughout.

I saw this ages ago but I don't have too much coherent to write about it. It was heavy-handed and not that clever. I resent Matt Dillon's character doing heroic things as if it redeems his rape of Thandie Newton's character (a repulsive and stomach churning scene). Is it stretching to make the comparison with a soldier who is as brave as anything in the field but who rapes women the next day? Does risking your life for another cancel out other morally repugnant behaviour? I don't think so but I'm not great on really deep thoughts.

Not Matt but Ryan.