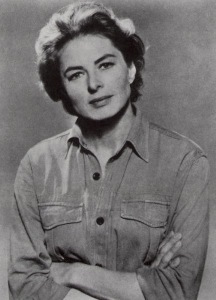 This is probably my favourite photograph of her. I hope there is no need to explain why.

When I was a teenager I saw every English language film Ingrid Bergman made from Intermezzo to The Inn of the Sixth Happiness (with the exception of either Rage in Heaven or Adam Had Four Sons, I can't remember which) and I have seen the majority of the films she made thereafter.

I had never seen even a glimpse of her pre-Hollywood Swedish or German films until I found clips on YouTube. I love the Internet at times like these when the kindness of strangers results in the sharing of rare things.

I chose the second clip of Die Vier Gesellen because it shows Ingrid making sandwiches which I guess is something she loved to do. I hope it wasn't just the cleaning she liked: This excerpt from Isabella Rossellini's memoir, Some of Me, is hilarious

Second to acting, Mother loved cleaning, which is not to say she loved even that above me. I'm sure she loved me more than cleaning, but what made her happiest was combining the two. We cleaned together.

She was beautiful. At times breathtakingly so. She was a little gawky and she was very tall (and naturally perfect to play The Small Woman). In the clips from Die Vier Gesellen, she is considerably taller than her female co-stars which is not reflected in this programme cover:

Great play is made of her lack of make-up in her US films and her naturalness. I think the difference between tweaked and left alone is startling in the following two images from the same period:

I recognise now that I had a huge crush on her when I was a teen. She was gorgeous and charming. What's not to crush on?

I'm not sure about her acting ability although I am hypercritical about people who I like a lot and so tend to over-analyse their performances. However, she was mesmerizing in Casablanca and Notorious and I love her "little brown babies" turn in Murder on the Orient Express (not that it was Oscar worthy!). Many of her films I have long since forgotten the detail of them. What was Saratoga Trunk about? I know I have seen For Whom the Bell Tolls but I can't remember anything at all about it. The Bells of St Mary's made me feel queasy, I remember that. Gaslight is a glossy version of the superior British film. Spellbound is excellent while Notorious is a top-notch gripping Hitchcock. The US films she made immediately after her Rossellini hiatus are awful. She must be the only triple Oscar to not actually deserve any of them - I mean Anastasia... She wasn't even nominated for Notorious which is quite probably her greatest performance. She was nominated for For Whom the Bell Tolls and not for Casablanca. Wev! Oscars mean squat.

She died on her 67th birthday after suffering for many years with breast cancer. I was very upset.

A woman who enjoyed life.