I am so glad I got to roam those hillsides 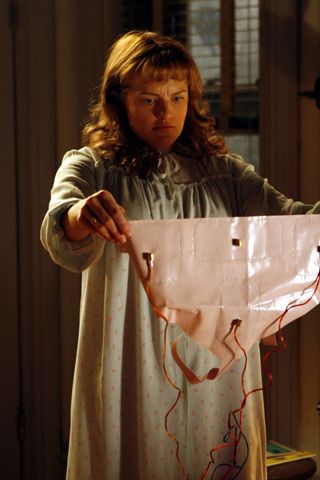 The promise made at the end of “Shoot” had given me high expectations that haven’t been met. I am being harsh – this is still fabulous drama and I have to stop being impatient. This isn’t a British six part serial but an ongoing drama so I shouldn't expect Betty to be burning her bra just yet (a myth, by the way ).

The mystery of Peggy’s weight gain is no longer. She is wearing variable quality prosthetics or else her ponytail is holding up her double chin when she is at work.

Peggy’s behaviour with her date was reprehensible. The writing was good here because it would have been easy to make him an oaf and easier to see how Peggy feels superior to things not-Manhattan.

This episode seemed to be a little bit coarse and cheap and perpetuates the cliché that the only way women get off when they are not with a man is mechanically.

I knew that when Parker turned up there would be sexual shenanigans but I was a little bit disappointed that it was a fantasy. Only a little bit - Betty can do better than Parker, after all.

Adam’s suicide was desperately sad and Pete is officially an arsehole after taking the parcel. I can guess what he might try to do but Don is surely made of sterner stuff than piddling Pete.

If Don wasn’t played by the gorgeous and charming and delicious Jon Hamm would he be half as bearable as he is? He treats his wife like a possession and the cold scene when he tells her he has been made partner and she can’t bring himself to kiss him without the urge to apologise seems like the beginning of the end of their mutual attempts to at least appear happy with each other.

Roger is so revolting and what he said to Joan was horrible. I’m not sure how she took it. At first I thought she was crying because she appreciated his sentiments despite the crudity with which it was expressed but maybe she was crying with horror at how he summed up their relationship strictly in terms of sex.