I won't tell anyone. I wouldn't do that.

Wow. They should have dumped all the episodes since “Tabula Rasa” and just gone with this one. The difference in quality is vast. Sometimes all US TV series ought to be just 13 episodes long.

Amelinda Smith, who played Katrina was great – it’s weird to look at IMDb to see how little she has worked. It was fab the way she chewed out the trio after she came to. It is also pleasing to see that at least one of the trio isn’t a complete heel. 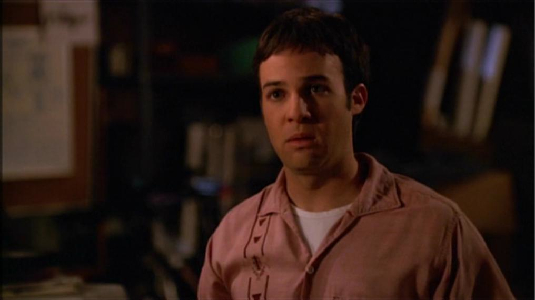 Adam Busch is exceptionally creepy and it is his destiny to be forever associated with the role. He turned up on Terminator: The Sarah Connor Chronicles as a future collaborator with the robots and was immediately identified as Warren from Buffy.

The sex is over – thank goodness. I sound like a colossal prude but there was far too much of it and it was just inappropriate. And to be extra honest, I resent how explicit it was when two women were barely allowed to touch each other the season previously (different network, blah, blah, I know, but still the double standards are outrageous). The worse scene was in the alley in “Doublemeat Palace” because that was just sleazy. The balcony scene in the Bronze at least served a purpose and Buffy really does need help to escape from Spike – the boyfriend who does the classic bad boy/girlfriend thing and tries to separate them from their friends.

Help does come in the shape of Tara and I adore all of Amber Benson’s three appearances. You got yourself a drink when she sat with her feet up at the Doublemeat Palace. She was cute outside the Magic Box talking to Willow (despite the outfit). And she was an awesome friend for Buffy at the end (a scene which is brilliantly written).

I didn't come back wrong?
No, you're the same Buffy. (lightly) With a deep tropical cellular tan.
You must have missed something. Will you check again?
Buffy, I-I promise, there's nothing wrong with you.
There has to be! This just can't be me, it isn't me. Why do I feel like this? Why do I let Spike do those things to me?
You mean hit you…Oh...Oh... 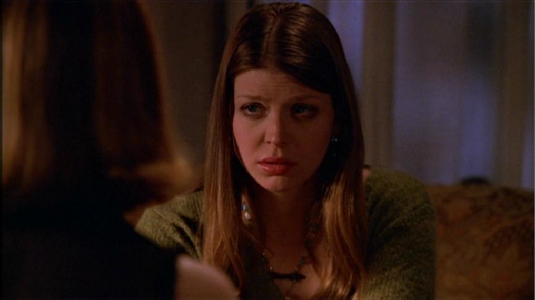 OK, I’m done. My favourite episode that no one else really likes is up next.