Can you just be kissing me now?*

It was quite weird watching the whole of this episode rather than the excerpts I usually watch. That said, I think it was good. It’s not the sort that you would ever put in your top twenty (well, I wouldn’t) because it is too tied up in the overall storyline as everything intersects so it doesn’t really stand alone. I think that I’m right in thinking that from now all of season 6 is one long narrative sequence similar to a British series.

The acting from all the cast is exceptional. I sometimes didn’t feel quite enough chemistry between Amber Benson and Alyson Hannigan (although I blame a lot of that on the restrictions placed on the depiction of a same sex couple – no touching! no kissing!) but they had oodles of it in their first and last scenes. I adore that first scene. Amber is just lovely. You get the idea with that.

As much as I love the final scene, it doesn’t seem appropriate or plausible. A part of me is saddened that Tara took Willow back (albeit with caveats) because Willow abused her. It seems wrong. Willow did a terrible thing. She does change but I feel uncomfortable about Tara’s return. I do realise that Tara’s return is entirely for expediency’s sake but that doesn’t help at all. It just reminds me of how expedient Tara was as a character full stop.

Tara’s speech appears to sum up the episode but since she hasn’t actually witnessed the most dramatic events, you have to ask, was she just round for a bit of comfort? Did Anya in the café depress her? Was Willow just too adorable to resist? Or did she want to show off her cool boots?

Willow is a dedicated student. Her two best friends have witnessed something rather traumatic, one has just run off with an axe with the other in hot pursuit, and Willow settles down with her books… She could have at least talked to Dawn.

Emma Caulfield really showcased her talent in this from her hilarious attempts to get the women to curse Xander (“I never use that word anymore.” “Coagulate?” “Squish, squish, squish.”) to her drunken vulnerability and her resignation at the end. 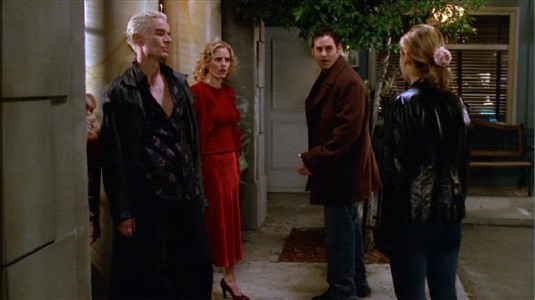 The scene when Xander confronts Anya and Spike and Buffy’s secret is revealed (“It’s good enough for Buffy.”) is a breathtaking one. It’s all out at last, there is sadness, relief, disgust and anger and it is so well acted. 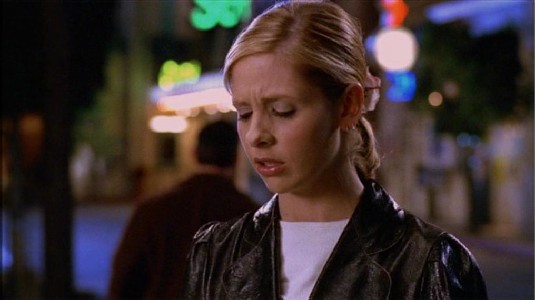 Poor Xander. I really dislike the poor chap. He tells Anya off for hurting him in revenge even though he was never supposed to know and I’m glad she got to tell him that he dumped her and thus had no right to lecture her. And earlier on he really should have been listening to Patsy Cline.

We also discover that Sunnydale has a major shopping street quite unlike anything else we have ever seen but we are reassured with the sight of the Magic Box street which is quite devoid of other people. Dawn is quite lovable and she seems to have grown noticeably taller.

I love these lines: “Did Willow put that there when I was dead? Cause if I had known, I would have crawled out of the grave sooner to…” and "Whoa. Guys? There have only been four...three! Three! Three guys. That's barely plural."

Not so sure about this line: “You know I'm only doing this cause I'm...I'm lonely and drunk and you...smell really good.” Obviously vengeance demons have a poor sense of smell.

*Charles for the win. Stephanie also got it but she called me sappy! Lizzie was very close.

You now have to guess the next episode title.