It's a test. Why not just cut it short and tell them I won it. 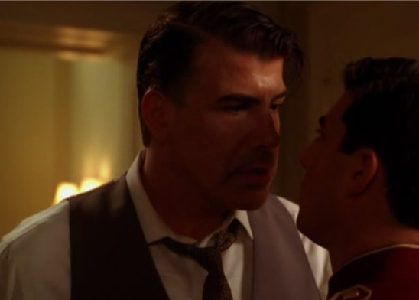 So Mad Men is back and I have no intention of waiting until next February or March to watch it. I will be buying Blu Rays of S1 and S2 and I pay my licence fee so Matthew Weiner and co aren’t losing out.

I wasn’t as disappointed in this as I was in S2’s opener but I do hope S3 doesn’t take quite as long as S2 to become excitingly watchable. I almost bailed around the time of “The Benefactor” because I thought it was too unpleasant.

There was not nearly enough Peggy or Betty and what we did see wasn’t very charming. There was lots of Pete and Sal but far too much of Don. I am as bored of watching Don and his cold-blooded philandering as he appears to be of the act itself. Even Don’s “memories” didn’t grab me; the story has been told. (Unless I view these scenes as an elaborate way of revealing that Don is a complete Dick because he’s even named after one.)

I’m not going to argue that Betty wouldn’t know the word lesbian and what it means (she did go to a fancy collage after all) but I find it extremely hard to believe that she would use the word to describe anyone let alone her own daughter. This moment seemed to me as false as the Drapers’ casual littering.

I liked Jared Harris as Lane Pryce (really though, Lane? That sounds so not British). He’s a much more interesting addition to the show after one episode than Duck ever was. However, he talked nonsense about London fog saying it was just coal dust when it fact they were fogs created by a mix of coal dust (and other nasty particles) and he also implied that they were long gone from London when in fact it was the Clean Air Act of 1956 that got rid of them. Sorry, but rewatching that scene makes me suspicious that he is British at all!

Pete is a fabulous character. One minute he is appealing, the next he behaves like an unpleasant child. Trudy does not need to have a baby when she has Pete for a husband. His happy dance and his conversation with her were great fun.

I wish that I wasn’t always scared that Ken is going to be colossally creepy at least once in every episode (he actually wasn’t in this) because I do like Aaron Staton.

Peggy’s conversation with Joan seemed off particularly since Joan made it clear that wasn’t interested in having it at all and Peggy seemed uncharacteristically gossipy.

Finally, finally, Sal! That was an incredible scene as, at last, Sal gets his (well, almost gets his) (mind you, it was also incredible that the bell boy’s gaydar was so finely honed). It’s weird that what Sal almost did doesn’t feel like unfaithfulness (is that everyone now?) because this incident at last has revealed to Sal what his desires are (or what he is). His relationship with Kitty is based on the submergence of his true nature and that isn’t healthy for anyone.

A few other things: I assume that naked breasts are forbidden on AMC because why was the stewardess covering them up and asking if Don liked them; Don’s accent sounded odd as he told the stewardess to forget her shoes; the bell boy took a long time in the bathroom; and the advertising campaign with the woman flasher was rather too tacky to be convincing.