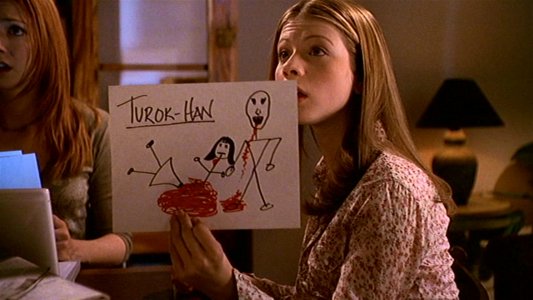 I almost said to Andy before it started that this episode was likely to be one of the worse ever because all I could remember was that Xander had a date and that she was played by a pop star I hadn’t even heard of then, never mind now.

However, except for Xander’s dire story this was a fun episode. Poor Xander, his story was plainly daft and poorly acted. Just what this random demon was going to do with the ubervamp wasn’t adequately explained and highlights a problem that periodically reoccurs in Buffy in which something which had been so crucial or so important or so precious at one point is then treated cavalierly later. And just how Xander sent Willow that text message will remain a mystery.

Actually, I have just remembered something worse than Xander’s story and that was the stupidity of Giles and Chao-Ahn. Yeah, Giles would definitely be that oafish and the jokes were just silly, no, just cheap and wince inducing. Why would she eat ice cream if she was lactose intolerant?

Oh dear, that just leaves Buffy and Robin. And Andrew and the First. Luckily it’s Buffy’s story and she got the majority of screen time, but I have to admit that now I have reached a peaceful state regarding Andrew’s presence on the show I think he is generally quite appealing. Ow, my expectations have dropped. I blame Angel.

Anyway, the best things in the show involved Buffy. I particularly enjoyed the scene of Willow balling socks (exciting day on the set for Ms Hannigan) and the conversation they have. Any dialogue that mentions a bidet of evil is just class. Willow laughing at Buffy and her counselling skills was cruel but amusing. 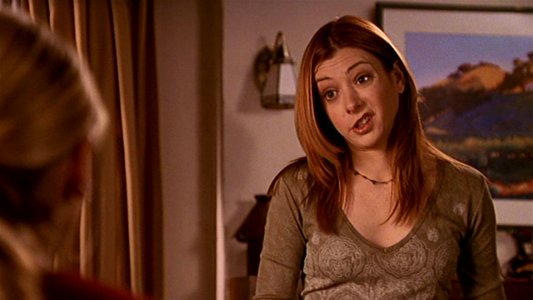 I keep reading the transcript and I keep coming across stuff I don’t like. I don’t mind Anya being jealous but I detest the use of “whore” and “slut”. Anya’s role is so shitty these days.

On the other hand, Giles’s gruesome flashcards were a treat. And this is what I do like about Buffy, this is like whizzing back to “Hush” and his presentation in the lecture theatre.

Buffy is struck dumb by the realization that Principal Wood is a white-hat and says it all by saying nothing.

I remember being greatly excited when Robin was told that Spike killed his mother. Oh, revenge. How thrilling. 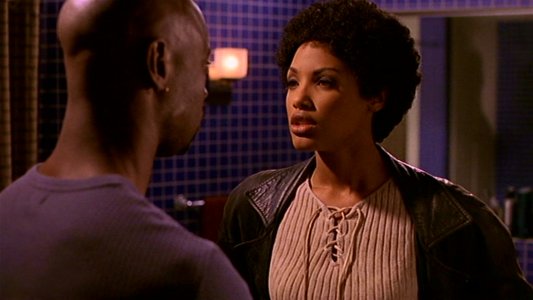