Well, he was evil, and people got killed, and now he...bakes. It's a thing.

Get It Done (Douglas Petrie)

Okay, Kennedy has started to really annoy me. Though not as much as the "what the hell was that?" speech from Buffy.

Anyone want to say a few words about Chloe? Let me. Chloe was an idiot. Chloe was stupid. She was weak. And anyone in a rush to be the next dead body I bury, it's easy. Just, think of Chloe, and do what she did. And I'll find room for you next to her and Annabelle. I'm the Slayer. The one with the power. And the First has me using that power to dig our graves. I've been carrying you. All of you. Too far, too long. Ride's over.

It may seem interminable but really it's not been that long. Plus, poor Chloe, yes, she got done by the First but I do believe that Spike was also a victim...speaking of Spike, I truly find him an objectionable character. "Nancy" as a term of abuse? Not nice.

"We've got a bunch of fighters with nothing to hit, a Wicca who won't-a, and the brains of our operation wears oven mitts." Funny, but surely the brains belong to Giles?

Ha, over at TWoP: "Every time Willow does a locator spell, a little part of me dies."

There was a lovely cute Dawn moment when she teases Buffy.

All the potentials are sent up stairs but when Spike is thrown through the ceiling he lands in an empty room. What a wasted opportunity because Spike scattering potentials would have been funny.

The shadowcasters scene was nifty. 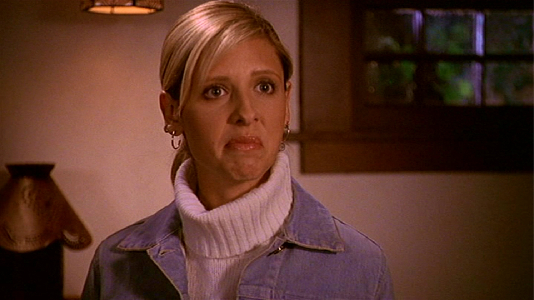