I am conflicted about liking this film. I have taken great exception to The Philadelphia Story because of its sexism and yet I manage to accept the racist attitudes of this film as being a product of its time and carry on regardless.

I know why - it's because I'm not black. So when Irene Dunne makes a silly face and does a funny dance, that's what I see. Except she's imitating black people doing a shuffle dance which once, I'm pretty sure had a different, offensive, name. And when she appears on stage wearing blackface, I accept that by acknowledging that that sort of thing used to be on our TV screens up until the late 70s.

Andy wondered if the racist elements were why the film wasn't on DVD which seems plausible because otherwise it is a great film.

Oh dear, what a weaselly word "otherwise" is.

In the film's defence, it does tackle miscegenation which was daring and missing from the 1929 version. 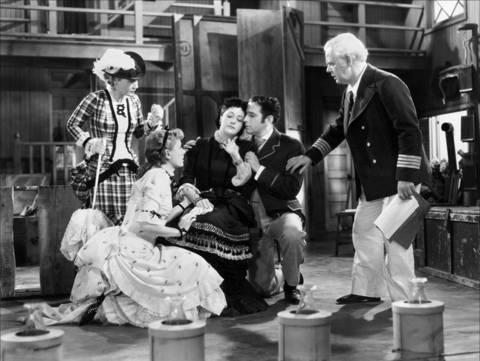 On a different note, I came across a fantastic fan site devoted to Dunne which is a treasure trove of material about her. Kudos to the site owner, she has done an awesome job. Maybe I'll stumble across the equivalent for Claudette Colbert or Jean Arthur one day.