You are Columbus, I am America, Discover me! 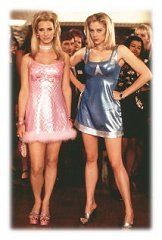 As the name of this blog suggests (other than what it literally suggests) one of my guilty pleasures is Romy and Michele's High School Reunion which is not as daft and brainless as it first appears. Its miserable rating on IMDb versus its rating on Amazon.com shows...I dunno...that there are too many blokes on IMDb? It is the mini-scenes that make it - any dance scene or exercise scene or Heather scene, or shop scene, or any scene when Romy and Michele are talking to each other, you know? (and the Ramon sex scene) are special.

Aside: Mia Cottet, one of Christy's friends is also in Amber Benson's Lovers, Liars and Lunatics (what an excuse for a link but turn off those lights, remove those frames and lower the price).

Finally, Mira is most definitely the Mary but only if you accept that Mary Tyler Moore is more attractive than Valerie Harper.

Moving away from sheer pleasure, may I take a moment to mention just how much I hated The Squid and the Whale (even more than The Royal Tenenbaums)? Both share angst filled middle class intellectual lives which are not worth spending two minutes contemplating, much less enduring the longest sub-80 minute film ever. And if Romy and Michele is superficial then what is there to say about the bloody awful scene with the school psychologist which is the definition of facile?