You just might have to live with some consequences

What a disaster this episode is and it has replaced "Bad Eggs" as my new worst episode of BtVS ever. At least "Bad Eggs" was just a poor monster of the week episode while this fails spectacularly at being serious because everyone except Buffy and Giles is just an arse.

The first mistake is treating Buffy as if she was a shirker (“just because you ran away and abandoned your post”) rather than someone who was traumatised. Obviously, only Buffy knows she killed a be-souled Angel but adding together Buffy’s burdens since the moment Angel lost his soul, it should be clear to her friends (and to a degree her mother) that she was under enormous stress. Her friends knew she had killed an Angel who she still had strong feelings for and that she felt terribly guilty and responsible. Her mother had thrown her out, she had been expelled, she thought that her friends had been unable or at the least unwilling to help her (“kick his ass”) and she thought that she was alone. Give her a break.

When she does return (to rescue the Scoobies who appear collectively to be useless in a fight) she isn’t given a genuine chance to explain. The behaviour of her oldest friends is scandalous and a mite implausible (early seasons Willow standing Buffy up? I could believe that of addled season six Willow but not this one), making out in front of her (followed by their concern in the next episode not to be too coupley) and turning up at dinner parties with a band and loads of uninvited mates.

And yet…are we supposed to think that anything they say to her at 1630 Revello Drive is in any way valid?

Willow’s “I didn't have anyone to talk to about all this scary life stuff” is just selfish and anything Xander says is just, just, bloody, bloody horrible with this just being the worst: “Look. I'm sorry that your honey was a demon, but most girls don't hop a Greyhound over boy troubles”. “Boy troubles”! I hated Xander at that point and I don’t think he ever really recovers in my eyes.

The second mistake is the zombie secondary plot which just gets in the way of maybe allowing the painful complaints from the Scoobies develop and make sense. I hate the hootenanny speech, we should have seen some unlikely Cordelia and Oz bonding while they hide in the cupboard under the stairs and, by missing a joke that already been set up earlier, the whole utter crapness of this episode is exposed. Cordelia: “I’m the dip”, later Buffy: “Great. Thanks. Anybody else want to weigh in here? How about you by the dip?” cut to Jonathon with no Cordelia in sight.

Everything is resolved by the team work and team spirit involved in defeating demons. Or it isn’t and we see estrangement and lack of communications stretch into season seven. Oh good.

The highlight of this nightmare episode is Sarah Michelle Gellar's performance which is tremendous; under attack in the lounge she is awesome. And I admit that our glimpse of Ripper Giles (“Like riding a bloody bicycle!” and threatening Snyder) is always nice.

"I have not only the right, but also a nearly physical sensation of pleasure at the thought of keeping her out of school. I'd describe myself as tingly."

"Private school? You mean, like jackets and kilts? You want me to get field hockey knees?" "What about home schooling? You know, it's not just for scary religious people anymore." 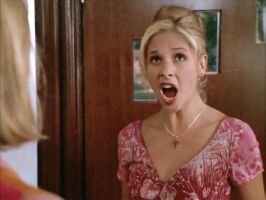 "Unbelievable. "Do you like my mask? Isn't it pretty? It raises the dead!" Americans!"