I’m Buffy. The Vampire Slayer. And you are…? 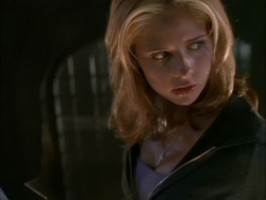 There are two entirely different storylines in this and it didn't really work to have them interspersed with each other. I like the gloominess of the Anne story but I also think how much you enjoy this episode depends on much you care about Lily and I cared a lot. Julia Lee gave a lovely, sad, sweet performance. The Scoobies coping back home is no match for Anne’s story and the Xander/Cordelia subplot just tees me off. Cordelia is so looking forward to seeing Xander, but their awkward reunion makes me cross because it makes no sense; they were happy at the end of last season and it feels contrived and not particularly interesting. Her feelings for him are just being set up for a fall and it seems that happiness just isn’t on the Joss agenda for any couple. It is unpleasant that Xander when he's peeved can consider the notion that Cordelia is only fit for “bait”. A dream gives me the first of many unwelcome Bangel moments of season three and, with a couple of notable exceptions, Buffy’s dreams are usually cack.There is an hilarious moment in the blood bank when someone says “ow” off screen and Buffy looks discomforted. Finally, I love the super fight sequence with the huge set, the hunga munga and Lily discovering her courage.

“I've always been amazed with how Buffy fought, but in a way, I feel like we took her punning for granted.” 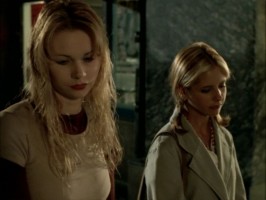 “Lily's from a song. Rickie picked it. I'm always changing anyway. Chanterelle was part of my exotic phase.” “It's nice. It's a mushroom.” “It is? That's really embarrassing.” “Um, well, it's an exotic mushroom, if that's any comfort.” “Well, before that, I was following this loser preacher and calling myself Sister Sunshine.” “What do they call you at home?” (with her lack of reply, I say, poor Lily)

“This is not a good place for a kid to be. You get old fast here.” (Ken gives the game away)

“Joyce, you mustn't blame yourself for her leaving.” “I don't. I blame you. You’ve been this huge influence on her, guiding her. You had this whole relationship with her behind my back. I feel like you've taken her away from me.” “I didn't make Buffy who she is.” “And who exactly is she?” (Joyce isn’t exactly as livid as I’d like but at least there is this little conversation for her to make a point)

“This'll probably go faster if we split up.” “Can I come with you?” “Okay, where did I lose you on the whole splitting up thing?” (poor Lily)

“Hey, Ken, wanna see my impression of Gandhi?” “Gandhi?” “Well, you know, if he was really pissed off.”