But I have to save the world… again.

Becoming I and II (Joss Whedon)

I am just about to commit sacrilege but the first twenty minutes of this two parter are boring. I admit this is the third viewing but unlike many BtVS episodes third time was one time too many. Kendra’s reappearance perked me up but I am surprised in a show that challenges in so many ways that it is a shame that Buffy was allowed to make fun of how she talked. At least, Buffy didn’t go Kevin Kline on us and make fun of Tara’s stutter (they left that to Faith).

Why wasn’t Oz told about Willow’s spell the first time? Why did anyone think that Willow “may be the best person to do this”? Surely, a real witch like Amy should have been drafted in. I’m not complaining that Willow was a witch and a powerful one at that but I feel there should have been more of a build up (and I Only Have Eyes For You wasn’t enough, imo) before this revealing of Willow’s talent and putting her at risk. As Giles says: “channelling such potent magicks through yourself, it could open a door that you may not be able to close”.

Usually Andy leaves the snorting over fashion faux pas to me but even he was prompted to remark how Willow’ purple outfit had the effect of making her skin look purple too. 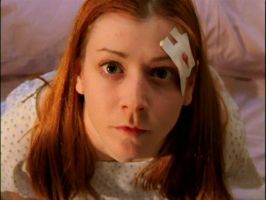 Willow: her resolve face is quite pathetic really but the moment when the magic takes hold of her is one of the iconic images from BtVS. It must be deliberately ironic that she is felled by a stack of library books.

Xander: he is rapidly becoming my least favourite regular by a long way (not that when I think of it he could be anything but my least favourite). However, I am inclined to agree with him that Angelus needs to be eliminated, he is a killer, and no matter if his soul is restored it can be removed from him and it will all begin again. (Obviously, I’m a liberal and didn’t really write that.) Moving on to the controversial moment when he doesn’t tell Buffy that Willow is going to try the spell again: I think he is right not to tell her because it might have lead to hesitation at a crucial time but what he was not right to do was to get Willow involved.

Spike: it's good to see him on his feet again. I’m no shipper but I do prefer Spike and Buffy together rather that Angel and Buffy. However, I do object to how much she hits him.

The unnecessary thumping starts in this episode and their sado-masochistic relationship hardly ever lets up. Another iconic moment occurs when he shrugs when he thinks Angel is going to kill Buffy (actually, this makes no sense because if Buffy dies then Angel’s plan comes to fruition and no more “Happy Meals with legs”). The scenes with Joyce are classic: “You hit me with an axe one time, remember? “Get the hell away from my daughter”” and the uncomfortable silence in the living room.

Joyce: her reaction is understandable and she doesn’t really mean it when she tells Buffy never to return. Joyce has a bigger claim to feeling betrayed than any other character. Every single person that she knows who knows Buffy has lied to her persistently. Now she knows why Mr Giles has been so attentive to her daughter and she has a right to be livid.

Kendra: I liked Kendra a lot. Bianca Lawson drew the short straw regarding accents but she was charming in her brief appearances and gave us the delight of “Mr Pointy”. Her death is a shocker but I do feel that Dru takes her too easily.

Cordelia: not much to note except she has the best line: “Why don't you just wait here to find out if it worked, see if he phones you?”

Giles: the use of Jenny Calendar (and a welcome reappearance by Robia LaMorte) to get information from him was horrible using his grief as a weapon and his brutal torture is cleverly implied.

Buffy: Angelus is right: Buffy falls for it every single time and more people die. I’m not surprised she was so depressed by season 6. 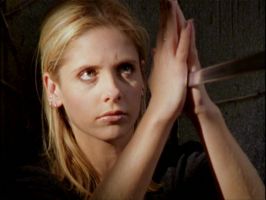 In the end, Buffy does find the strength to kill Angel and what makes Whedon a brave and adventurous writer is this comes after his soul is restored making “close your eyes” an even more powerful moment. The best moment in the show is when SMG shows her class in the scene when Angelus is taunting her (“No weapons. No friends. No hope. Take all that away and what's left?) and she opens her eyes to say “Me.”

“Don't touch me! You have fish hands!”

“I don't know. What happened to Angel wasn't his fault.” “Yeah, but what happened to Ms. Calendar is. You can paint this any way you want. But the way I see it is that you wanna forget all about Ms. Calendar's murder so you can get your boyfriend back.”

“This means I can't help you study for tomorrow's final.” “Ah, I'll wing it. Of course, if we go to Hell by then, I won't have to take them. Or maybe I'll be taking them forever.”

“I wanna torture you. I used to love it, and it's been a long time. I mean, the last time I tortured somebody, they didn't even have chainsaws.”

“What are you, just some immortal demon sent down to even the score between good and evil?” “Wow. Good guess.”