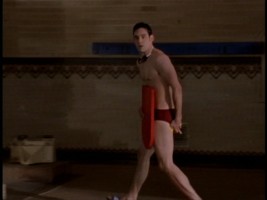 This is the episode that surely everybody refers to as the one with Xander in Speedos. I’m not entirely sure why this episode inspires such ire. It isn’t as lame as I Robot You Jane, Bad Eggs or Some Assembly Required and it is less unpleasant than Killed By Death. I wonder how many people are turned off by the ill conceived introduction of the element of rape. Buffy’s joke about doing it with the entire swim team is well-delivered but just elicits an eww from me. Rape isn’t funny and has no place in a monster of the week episode.

However, there are the delights such as the girls’ reaction to Xander in Speedos (“Shh! I'm undercover” “Not under much”) and his embarrassment (though it isn’t entirely plausible that many would be embarrassed with a body like that – Xander in season six might be). And the scene when Cordy thinks Xander has lost his skin is when I first realised just how much she cared for him (much more than him for her): “and we can still date. Or, or not. I mean...I understand if you wanna see other fish. I'll do everything I can to make your quality of life better. Whether that means little bath toys or whatever.”

TV is weird – the notion of people losing their skins and having skin lying around in all its gory glory is apparently okay but two women kissing isn’t.

“Xander, I know you take pride in being the voice of the common wuss, but the truth is, certain people are entitled to special privileges. They're called winners. That's the way the world works.” “And what about that nutty all men are created equal thing?” “Propaganda spouted out by the ugly and less deserving.” “I think that was Lincoln.” “Disgusting mole and stupid hat.” “Actually, it was Jefferson.” “Kept slaves. Remember?” (well, Cordy has that argument won)

“This doesn't make any sense.” “Yeah. The skin's the best part.” “Any demons with high cholesterol?” pause “You're gonna think about that later, mister, and you're gonna laugh.” (this is a wonderful joke made even better by Buffy telling us it's a wonderful joke - apparently these jokes are called "buy backs") “I wouldn't break out the tartar sauce just yet.” “I think we'd better find the rest of the swim team and lock them up before they get in touch with their inner halibut.” 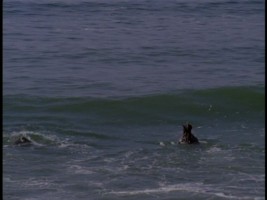