Must be exciting being from England 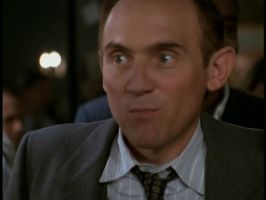 I enjoyed this episode but I've found it hard to find a lot of quotable dialogue. It builds up nicely as the behaviour of the adults deteriorates. It is very well done and they have so much fun: Tony Head and, perhaps, Armin Shimerman the most.

Buffy and her SATs are so annoying. She clearly couldn’t have possibly got the scores she did get: “B. I'm going with B. We haven't had B in forever.”

“Actually, I'm looking forward to it. I do well on standardized tests. What? I can't have layers?” – well no Cordy, not after you split up from Xander

Giles being hit on the head by a ball is funny but Buffy lying to her mum and Giles isn’t. And the scenes with Angel, snore.

Willow and Xander playing footsie under the table is plain wrong.

I had forgotten how naff the Dingoes were.