You boinked the undead 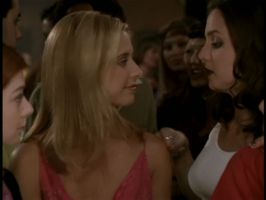 "I wouldn't use the word "dating", but I am going out with somebody. Tonight, as a matter of fact." "Really? Who?" "Yo, what's up? Hey, time to motorvate." "Really, we're just good friends." and with that, "hoyay" and fan fiction writers get scribbling. Another fight between Faith and Buffy: we could get to like this. It's interesting how much damage they cause to each other because it shows how much they can hurt each other in every meaning of the word. I think Faith took this comment: "Faith! A word of advice: you're an idiot." too literally and the episode ends with Faith rejecting Buffy’s friendship and that makes me sad because I like "good" Faith.

Cool, more T'ai Chi, wake me up when Angel gets his new series. Giles's kettle is not the sort that whistles. 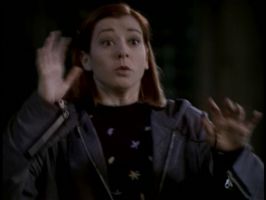 Aw, a cute Willow that has been absent for a while

Xander and Willow kissing in the stacks: I didn't remember the fluke as not actually being fluky: this isn't a mistake; it's full-on cheating aka unfaithfulness aka betrayal. I'm debating whether Willow's behaviour here is worse than her Lethe's Bramble spell on Tara. In this case, she is giving in to temptation and in the latter, she was attempting to evade something uncomfortable that she didn't want to face. Willow is starting to feel very guilty (just because she thinks she was caught?) and there are two good scenes with her and Buffy because of this. Buffy (and the other Scoobies) are always oblivious to the others' worries and this just gets worse as the seasons progress. "Okay. This will make me feel better, right? You know, I always consider myself a good person. Floss, do my homework, never cheat. But lately, and please don't judge me on this, but I want you to be the first to know that, that..." which is quicker said as "I'm very seldom naughty" but actually not true because as she tells Buffy she never cheats, she is cheating on Oz.

The intervention: not quite as awfully self righteous and infuriating as Dead Man's Party but... It is notable that the two men who matter most to Buffy in this scene are both standing while conciliatory (and guilt ridden) Willow is seated. Xander is well out of order as usual and my hatred of his character is rising. I can’t help thinking the writers made a real mistake making him so horrible because in this case he isn't actually in the wrong but the way he is stating his case ("...for Angel to go psycho again the next time you give him a happy?", "you would stop him. Like you did last time with Ms Calendar") is hateful. Thankfully, this scene isn't interrupted by zombies but by a marvellous scene when Giles tells Buffy how much she has disrespected him which is powerful because it's true, well stated and well acted. Later, Xander has no right to tell Faith about Angel and, although he presumably he knows that Willow's spell worked, he's still happy to help Faith kill Angel. "Your boyfriend's not as cured as you thought." "Only what everyone knows. She's a big girl. Came to her own conclusions.": he knows this just isn't true and that if it was Angelus, Giles would be dead (like Ms Calendar, you arse) and why are TPTB doing this to Xander? "Are we cool?" "Yeah. Just seeing the two of you kissing after everything that happened, I leaned toward the postal. But I trust you." - Buffy, just tell him to eff off.