You’re having too many ors! Pick one!

"Well, I think this is great! Now you can leave and never come back!" "Well, I mean that in a positive way. Get out of Sunnydale. That's a good thing. What kind of moron would ever wanna come back here?" and in one of BtVS's frequent "ironic segue fairy" cuts Spike arrives in town which is a good thing (but only in single episode doses). (Actually, that cut isn't ironic so let's call it the clunky segue fairy.) As an aside, I have to confess to reading Television Without Pity's recaps but only for the episodes that I don't mind them being mean about.

Spike murders the magic shop woman and we still laugh at him. He’s threatening Willow with a bottle and a few minutes later he's amusing us. I'm confused by this. The scene with Willow listening to Spike go on about Drusilla (as if we really care) is very odd; (a cold) Willow sits there looking awkward (rather than terrified), occasionally touching her mouth, and it must be the longest scene in which Willow is silenced (excluding Hush, of course) except for a hilarious "there, there". Spike proceeds to bore Joyce but when Angel turns up, his gesturing behind Joyce is priceless.

Why is Willow attempting to keep the spell a secret? Reviewing season three has made me more aware of the less savoury aspects of Willow's character: her cheating, lying and secrecy all build up to season six. And by not telling Xander, she is also behaving in a controlling way; she thinks it's better for him not to know and it’s always better for Willow not to confront emotional difficulties.

Oz is able to locate Willow by smell: the smell of fear and not the smell of "hugs" this time. "It's Willow. She's nearby." "What? You can smell her? She doesn't even wear perfume." "She's afraid." "Oh, my God. Is this some sort of residual werewolf thing? This is very disturbing." "I really agree."

Buffy doesn't like what Angel has to say about her leaving to go to college though by the end of the episode with a little advice from the unlikely source of Spike she has to agree that she shouldn't see Angel.

Oh dear Lord: it's season six "You're not friends. You'll never be friends. You'll be in love 'til it kills you both. You'll fight, and you'll shag, and you'll hate each other 'til it makes you quiver, but you'll never be friends. Love isn't brains, children, it's blood, blood screaming inside you to work its will. I may be love's bitch, but at least I'm man enough to admit it."

Cordelia and Oz discover Willow and Xander kissing (though even during kissing, you'd think they'd hear the door open) and Cordelia's character development is set to vanish after the conclusion of the next episode. Poor Cordelia, I had come to like her a lot and to appreciate Charisma Carpenter's performance. It's a shame that for the next few episodes she is reduced to caricature again.

The funeral-that-isn't-Cordelia’s device is so cheesy and naff and used too often by Whedon and co (even in Firefly’s Serenity when we think Kaylee is dead in...)

"Well, I can see why you'd be upset. That was my sarcastic voice." "You know, it sounds a lot like your regular voice." "I've been told that."

"They don't stand a chance. I'm really good. Or I used to be, when they had the inflatable things in the gutters."

There is a delightful scene with the mayor and Allan - "Loose cannon. Rock the boat. Is that a mixed metaphor?"

While Buffy is highly amused by Giles' preparations, she takes a compass and uses the mirror to look at herself. 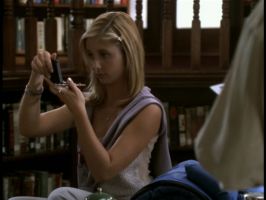