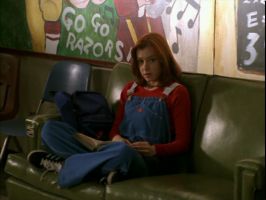 This is a very dark episode in both theme and look. It has some emotional scenes in it with excellent acting particularly from Alyson Hannigan.

Faith pretends she doesn’t care or does she believe this?

“Anyway, how many people do you think we've saved by now? Thousands? And didn't you stop the world from ending? Because in my book, that puts you and me in the plus column.” “We help people! It doesn't mean we can do whatever we want.” “Why not? The guy I offed was no Gandhi. I mean, we just saw he was mixed up in dirty dealings.” “Maybe, but what if he was coming to us for help?” “What if he was? You're still not seeing the big picture, B. Something made us different. We're warriors. We're built to kill.” “To kill demons! But it does not mean that we get to pass judgment on people like we're better than everybody else!” “We are better!”

The first time I saw the scene when Buffy thinks Giles believes Faith’s take on Allan’s death I was shocked and even now, I’m all agog by a stunning piece of cleverness by Faith and by Giles.

Oh Wesley, Wesley. I’m not sure I can like Angel; I mean Wesley is in it. 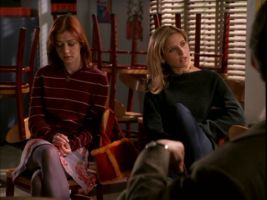 The scene in the cafeteria as the Scoobies decide what to do is just a marvellous opportunity for AH to shine. As Xander slowly reveals that he had sex with Faith and the others equally slowly cotton on, Willow sits there twisting her hands in her lap looking devastated but just in control. Xander did the thing and didn’t tell her. Life sucks for Willow in this episode and it doesn’t help that Oz is absent throughout.

Faith is in the process of murdering Xander when he is rescued by Angel. Maybe I missed it but this “incident” is not mentioned an awful lot in subsequent episodes. Willow dislikes Faith more than Xander ever seems to. For example, in this very episode: “I kind of have an issue with Faith sharing my people. But she murdered someone and accused Buffy. Then she hurt Xander. I hate to say it, but maybe she belongs behind bars.” Faith didn’t murder, she killed; but she was going to strangle Xander. However, the language used here seems to diminish Xander’s near death experience and Xander himself doesn’t have any more dialogue after Faith’s attack and, certainly, in the next three episodes the strangling isn’t mentioned. 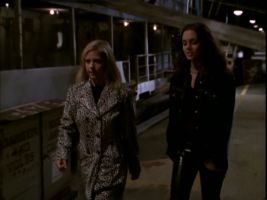