I’m a blood-sucking fiend! Look at my outfit!

The fiftieth episode of BtVS and it’s my number one so far. Andy said that he thought my summary of this would consist of a repeat of the script and that’s almost what this is.

“For a thousand years I wielded the powers of The Wish. I brought ruin to the heads of unfaithful men. I brought forth destruction and chaos for the pleasure of the lower beings. I was feared and worshipped across the mortal globe. And now I'm stuck at Sunnydale High. Mortal. Child. And I'm flunking math.”

Emma Caulfield (as the other non-Scoobies were) was generally wasted on the show with crass one-liners but when she was given something to get her teeth into she was smart and funny. I assume it’s calculus and trig she’s talking here and not arithmetic (because capitalist Anya can certainly add up).

“I know Faith's not gonna be on the cover of Sanity Fair, but...she had it rough. Different circumstances, that could be me.”

“Match? You want us to breed?”

First bit of over-analysis: Faith has just gone from being apprehended by the Council after being a majorly bad girl involving such incidents as killing a human and almost murdering Xander to training and bantering with the others. And it’s like there is a scene missing where it was explained how Faith was going to be rehabilitated and everybody said how they were going to behave as if nothing happened.

Even Wesley is amusing in this episode: “Oh, no, no, no. I'll be fine. Just give me a minute. And some defibrillators, if it's not too much trouble.”

Second bit of over-analysis: Oz has a gig in Monterey and doesn’t tell Willow? If Willow wasn’t so keen on tarring herself with the boring brush then she should have been asking why her boyfriend wasn’t sharing.

“See, I told you. Old Reliable.” “Oh, thanks.” “What?” “Old Reliable? Yeah, great. There's a sexy nickname.” “Well, I didn't mean it as...” “No, it's fine. I'm Old Reliable” “She just means, you know, the geyser. You're like a geyser of fun that goes off at regular intervals.” “That's Old Faithful.” “Isn't that the dog that, that the guy had to shoot...” “That's Old Yeller.” “Xander, I beg you not to help me. Will, I didn't mean it as a bad thing. I think it's good to be reliable. “Well, maybe I don't wanna be reliable all the time. Maybe I'm not just some doormat person. Homework gal.” … “Maybe I'll change my look! Or cut class. You don't know.” “And I'm eating this banana. Lunchtime be damned!” 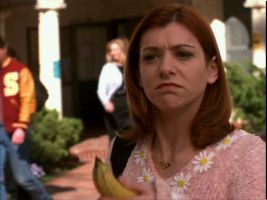 Just everything is so right about this scene with Xander making things worse, Buffy getting in a tangle, Willow’s indignation and the banana finish.

“I believe these chicken feet are mine. Look, m-magic is dangerous, Anya, i-it's, it's not to be toyed with. Now, if you'll excuse me, I have someone else's homework to do.”

These two exchanges with Anya summarize Willow so well. The idea that she’s missing out really annoys her but at the same time she wants to please and make people happy so she does things she shouldn’t and she ends up in all kinds of messes. And, of course, this is strong foreshadowing.

Lots of people even after all these years want to see a Faith or Spike or even Willow spin-off but I just don’t think they would work (I mean have you seen Tru Calling? Eliza Dushku can’t carry a show) because BtVS works because of Sarah Michelle Gellar’s tremendous performance. She isn’t 100% all the time (who could be in over 140 episodes?) but in scenes like this, she is just hilarious and has perfect timing. And in other scenes she’s emoting like the Emmy winner she is and she is plain under-rated.

Third bit of over-analysis: the very least Buffy and Xander should do after realising Willow has been turned is to apprehend her rather than letting her go because their inaction directly leads to Sandy being vamped. However, I suppose they are in a state of shock…

“Say, you all didn't happen to do a bunch of drugs, did ya?” 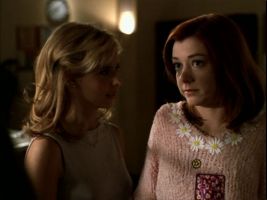 Ok, I resisted just repeating the script here but I could have! Everything is great: the sadness of the Scoobies, Xander shaking his cross, the hugs (especially Giles’s), Willow’s confusion, Giles’s lack of anything constructive to say, etc. 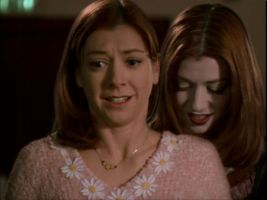 Fourth bit of over-analysis: why does Willow turn her back to Vamp Willow and what makes her say, “Would that mean we have to snuggle”? Unless she just knows what she wants. 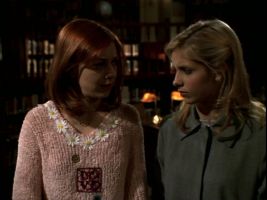 “It's horrible! That's me as a vampire? I'm so evil and... skanky. And I think I'm kinda gay.” “Willow, just remember, a vampire's personality has nothing to do with the person it was.” “Well, actually...that's a good point.”

“Don't worry. I won't do anything that could be interpreted as brave.”

Except going into the Bronze!

The cutest moment of a very cute character is when Willow waves at Oz after entering the Bronze.

“She bothered me. She's so weak and accommodating. She's always letting people walk all over her, and then she gets cranky with her friends for no reason. I just couldn't let her live.”

Faith kills Allan Finch because she couldn’t stop herself but Buffy is capable of stopping and that is the difference between them.

Fifth bit of over-analysis: “We send her back to her world, and she stands a chance. It's the way it should be anyway.” I’d say not: she’s an evil vampire who is likely to be doing all kinds of unspeakable things in her own world and to send her back is morally wrong. Luckily, this only dawned on me after watching the episode several times so it never bothered me before. And, of course, the viewers know that she is going back to be poofed. Tara Incognita? by HonorH is an excellent work of fan fiction that deals with this misstep by the Scoobies. 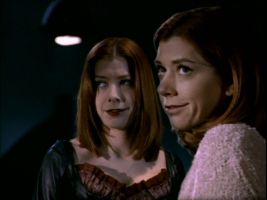 My final observation, that perhaps doesn’t need to be said, is that Alyson Hannigan is awesome in this episode as all three Willows.