The Lion, the Witch and the Wardrobe and Flightplan

While visiting Andy's dad we made sure to watch a couple of films on Sky Movies that we aren't likely to buy on dvd.

The Lion, the Witch and the Wardrobe

Wow, this was a surprisingly poor film making ill use of marvellous source material. The cgi was the worst I have seen in a major film for years: some scenes looked like Hitchcockian back projection (ok, I slightly exaggerate) and in another Lucy and Susan's hair is not being blown back like you would expect while riding on a galloping lion. The voice acting was flat with Liam Neeson decidedly non-awe inspiring as Aslan. The animals were just not convincing as intelligent talking beasts with Maugrim being the worst. The children were dull with poor Peter not coming over heroic or even athletic enough while Edmund just wasn't at all obnoxious (and you certainly didn't feel his lust for Turkish Delight). 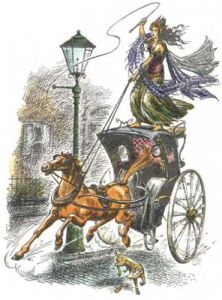 Tilda Swinton was a disappointment as Jadis (who should have looked like this illustration from The Magician's Nephew) because of terrible costume design and a lack of engagement with the character. The battle scenes were poorly choreographed and I bow at the feet of Peter Jackson who must be the only director who has made cgi battles between cgi characters matter. There was no real sense of peril or of distance. All in all, a disaster, but a disaster with very good reviews by both professional and amateur critics alike which just makes me go "huh"?

There is only one reason to seek this film out and that is Jodie Foster. In a role not dissimilar from Panic Room she is riveting and convincing, unquestionably more so than the film itself which is rather daft.