And, besides, I have a shot at being a bad ass Wiccan, and what better place to learn? 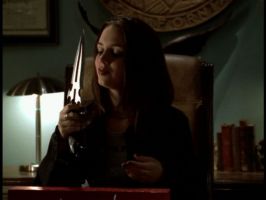 The big question: is Willow worth “thousands of lives”?

With Willow getting accepted to Oxford ("tea-bag central), MIT, Yale, Harvard, Mars University, etc, I think they rather overdid the Willow is bright thing.

I’m assuming that Willow used a 9H pencil to dust the vampire because it would have needed to be extra hard to do what it did. Plus it is difficult to believe that someone as terrified and as new to witchcraft would have that sort of control. Remember what happens to her control at the beginning of Doppelgangland?

Her standing up to Faith is more likely: “Oh yeah? Give me the speech again, please. "Faith, we're still your friends. We can help you. It's not too late."” “It's way too late. You know, it didn't have to be this way. But you made your choice. I know you had a tough life. I know that some people think you had a lot of bad breaks. Well, boo hoo! Poor you. You know, you had a lot more in your life than some people. I mean, you had friends in your life like Buffy. Now you have no one. You were a Slayer and now you're nothing. You're just a big selfish, worthless waste.”

The mayor may be a bad guy but he’s on the nose about Angel and Buffy’s future: “Yeah, and that's just one of the things you're going to have to deal with. You're immortal, he's not. It's not. I married my Edna May in ought-three and I was with her right until the end. Not a pretty picture. Wrinkled and senile and cursing me for my youth. Wasn't our happiest time. And let's not forget the fact that any moment of true happiness will turn you evil. I mean, come on. What kind of a life can you offer her? I don't see a lot of Sunday picnics in the offing. I see skulking in the shadows, hiding from the sun. She's a blossoming young girl and you want to keep her from the life she should have until it has passed her by. My God! I think that's a little selfish. Is that what you came back from Hell for? Is that your greater purpose?”

You can also feel sorry for Snyder: “You. All of you. Why couldn't you be dealing drugs like normal people?”

“Actually, this isn't about you. Although I'm fond, don't get me wrong, of you. The other night, you know, being captured and all, facing off with Faith. Things just, kind of, got clear. I mean, you've been fighting evil here for three years, and I've helped some, and now we're supposed to decide what we want to do with our lives. And I just realized that that's what I want to do. Fight evil, help people. I mean, I-I think it's worth doing. And I don't think you do it because you have to. It's a good fight, Buffy, and I want in.” This does make sense and I do hope that she eventually graduated with honours (or the US equivalent). 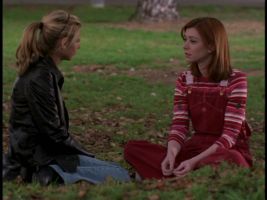