Oh, you moron. That dinette set should be mine.

Seth Green had had enough of not being able to go to the dentist when he needed to in order that he could stay on set all day and say “Their spelling's improved” “It was intense” or “Pretty dull” (all from Earshot). So he decided to leave and rather like Anthony Stewart Head in season six but unlike Kristine Sutherland in season five, his character doesn’t die. No deaths for the men of BtVS (except Jesse but we hardly knew him) but plenty for the women. Clearly, I’m not saying anything new and I know all the ripostes but it’s there on 35mm: the roll call of dead women is long, the one of men is not. Maybe Doyle’s death in Angel can be viewed as a counterpoint but his death is not like the others: his is a noble death, there are no brain tumours for him or improbable stray bullets.

Don’t get me wrong, I adore BtVS (I hope you can tell) but the accumulation (so I apologise for leaping ahead) of these incidents does leave a bitter taste. 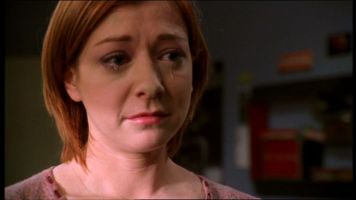 Anyway, this is a cracking episode with fabulous performances from Alyson Hannigan (blimey, she can cry), Seth Green and Paige Moss (in one of the more memorable one-off roles though it would have more interesting if she hadn't been so predatory and one-dimensionally evil).

There is much to write about but three things stand out: I question whether Willow is right to say that what Oz did with Veruca “doesn’t compare” with what she did to him. Once again Oz makes a decision for the both of them with Willow’s opinion not being of equal importance (“That’s your solution?” “That's my decision.” “Don't I get any say in this?” “No”). Not gonna kiss you, not gonna make love, gonna leave. He may be right in the first two instances but in the third he is wrong to leave her without any discussion. Finally, after Oz kills Veruca, he turns on Willow and that is a truly sinister moment.