That is so Teutonic

I was so looking forward to writing about Pangs and then realised I had completely forgotten about The Initiative and looking at the transcript I see why. I had obviously blocked out the unpleasant machismo of the Initiative boys, the fact that Riley hits Parker for what he says about Buffy and not because Parker is a sexist pig full stop, the icky relationship between Spike and Harmony, the insulting fight between Harmony and Xander, and, oh, did I mention the unpleasant machismo of the Initiative?

However, there are highlights and as usual, for me, they involve Willow. Despite the depths of her misery, she can’t help being helpful Willow in Riley’s quest to get to know Buffy. The Spike impotence scene is a classic but only after the break because before that the attack looks uncomfortably close to rape. The dialogue is outrageous: "I don't understand. This sort of thing's never happened to me before." "Maybe you were nervous." "I felt all right when I started. Let's try again. Ow! Oh! Ow! Damn it!" "Maybe you're trying too hard. Doesn't this happen to every vampire?" "Not to me, it doesn't!" "It's me, isn't it?", and this depressed Willow is flattered that Spike does find her sexually attractive, I mean, biteable, and her realisation that she should just hit him is very funny. 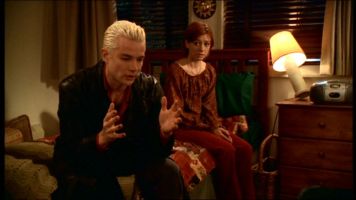