Imaginary Xander is quite the machine

Angel is in this episode and I’m not sure why. Well, actually I wouldn’t be sure why unless I was also watching Angel because his presence in Pangs is only a device to get Buffy to LA.
******

A quick aside, we are up to Eternity in Angel and I am not impressed at all so far. If this wasn't the creation of Joss Whedon then I think both Andy and I would have stopped watching by now. We have Wonderfalls, Carnivale and the second series of Dead Like Me to watch and I can't help feeling that we are wasting our time with Angel. If Five by Five and Sanctuary are disappointments then...
Brief thoughts on why: killing off Doyle was a mistake because he was charming and likeable. I still haven’t warmed to Wesley because his pratfalls annoy me (he can't be clumsy one moment and the next moment masterfully taking on a roomful of villains) but I do like his bumbling when confronted by women. I am happier with how Cordelia's character is being treated after season three BtVS but Expecting was an affront on many levels: not least because the story of an unwanted pregnancy that is also alien could and should have been developed over a number of episodes not thrown away on this lame effort. I do like Kate (Elisabeth Rohm is lovely (except in photos)) but I’m sure the story of a blonde police detective with a difficult father was done on Cagney and Lacey. All the things that were not quite right with Tim Minear's The Inside are the same problems with Angel e.g. silly and implausible plots and a lack of continuity from episode to episode. The acting in The Inside was better though. And all because it’s supposedly a "gritty, urban show" all the daft things that I can forgive on BtVS, irritate me on this: inconsistencies in the vampire mythology, Angel getting around in a convertible, Angel Investigations' finances, Cordelia’s disappearing and reappearing skills with a computer, the myriad of continuity errors, the plot holes, etc, etc, just annoy the hell out of me. And with an Irishman on set for ten episodes why couldn’t he coached DB on his awful accent? I concede that Angel dancing is bloody hilarious and those two minutes from She (coupled with Wesley's hand knitted jumper) may be enough to keep me hanging on.
******

Pangs is as heavy handed on the Native American issue as Beer Bad is on under-age drinking but never mind. This is a very funny episode (Jane Espenson is very good writer of comedy), which is just off because Willow is far too indifferent to Xander’s illnesses.

Anya is on top form in the opening sequence: "I'm imagining having sex with him right now." and "Well, I think that's a shame. I love a ritual sacrifice. "It's not really a one of those." "To commemorate a past event, you kill and eat an animal. It's a ritual sacrifice, with pie."

This image is such a BtVS image: Anya's trousers are a sartorial disaster, Buffy is wearing one of Willow's hats (or is it Riley's from Restless?) while Willow is holding her hands in front of her which she does in practically all episodes of BtVS after Oz leaves.

Buffy's obsession with her Thanksgiving meal is very in character with her insistence that it is very important: "Over bickering and confusion, I'll take pie. We will find a solution. And we will have a nice dinner, ok? Both. End of story. I'm having thanksgiving, and it'll be perfect." 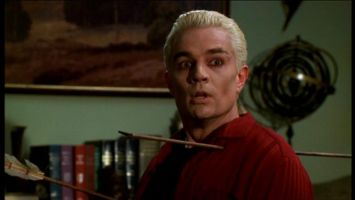 Spike joins the Scooby gang from this episode and he is just a hoot for the rest of the season. "Willow, tell them what I did." "You said you were gonna kill me, then Buffy." "Yes, bad, but let's skip that part and get to the part where I couldn't bite you." "It's true. He had trouble performing." James Marsters' facial expressions while Spike is under attack from arrows are hilarious.

I thought I would have more to write but I think I have found with funny episodes that I have nothing to say except the obvious like it was really funny.