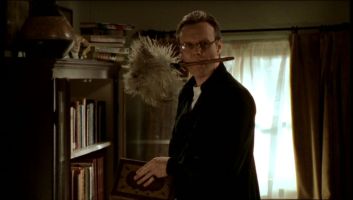 A Giles episode (that’s one more than Xander gets this season) and a good one too. Anthony Stewart Head (I'm never really sure what to call him because he's really Anthony Head but for some reason his name just feels odd - I blame the Head) embraces playing a demon with gusto. I don't think there is a moment with him as a demon that isn't interesting. He turns to Xander but Xander doesn't (literally) understand him but look who does? Spike. His chasing after Professor Walsh after saying this: "I refuse to become a monster because I look like a monster. I have a soul. I have a conscience. I am a human being. Oh, stop the car!" is a hoot. 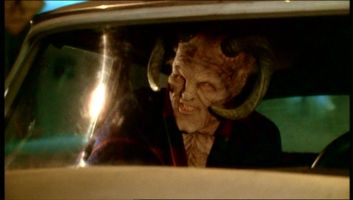 "Nice phone." "Yes. Fabulous technology. See, if anyone has information I need to know, they can, uh, simply tell me about it. Through this ingenious speaking tube. I'm very excited." I reckon if the Scoobies had had mobile phones (even Angel has one by now) then none of the estrangement and misunderstandings of the future would have happened (and wouldn't that have that been exciting?). Oh, and Buffy can't really have forgotten that she hadn't told Giles about the Initiative and Riley because at her party she would have been reminded as she introduced Riley to Giles.

Ethan Rayne is such a good villain partly because of Robin Sachs’ fruity tones but also because the character is a satisfactory mix of evil, humour and self-preservation and gets to mutter off screen "You know you're really very attractive." as Giles says ""Oh, she's awful. She said I was an absent male role model. Absent my ass. I'm twice the man she is."

Giles feels bad about what Walsh says because it must be close to how he feels: that he is Buffy's father figure and may have failed her. However, Buffy is an extraordinary individual who can't be made to fit like a member of a military unit. Riley is partly wrong when he says "And you're in charge. You're like, make the plan, execute the plan. No one giving you orders." Buffy never plans (not in a military way anyway).

Very early there are warning signs in Buffy and Riley's relationship: "Buffy, I can't take you with me." "You're not taking me with you. I am going and I am letting you come along." "Buffy, it's not really your call. This is a military operation now." "Then call out the troops. Because nothing less than that is gonna stop me. This demon did something to Giles and I'm gonna kill it."

I’d loved to have gone to USC so that I could’ve had a huge dorm room too. Tara’s is fantastic with the fairy lights and the arty posters. The spell Willow suggests is incredibly 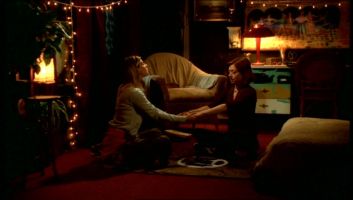 romantic: not floating and peeling an apple but floating and removing the petals of a red rose…and it takes Tara a long time to realise that she’s just holding Willow’s hands and not actually doing a spell at all.

As I write this I realise I should put up a warning now: if you are a Tara-phobe this blog is going to be hard work for you from now.

It can be viewed either as annoying or intriguing that so much of Willow and Tara’s relationship is not (ahem) out there. We don’t know the details of the beginning of their relationship but we can interpret looks, gestures and possible (well, probable) metaphors and, of course, guess such things as Willow’s coming out (to herself and Tara), their first kiss, their first confessions of love, the first time they had sex, etc. It is terrible double standards that we see so much heterosexual sex on the show but none of the above but, on the other hand, the imagination is a powerful thing.

Willow lies to Buffy when she says she was working late at the chem lab and, honestly, if people didn't know something was up regarding Willow's relationship with Tara then they really ought to watch something less complicated.

And I really love this dialogue: "Oh, no. I mean, she's like forty. She's got better things to do than hang out with a bunch of kids." (No, really, I love hanging with the kids. Oh, you weren't talking about me.)